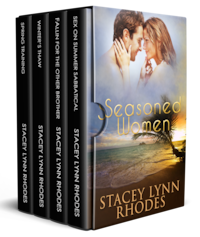 Who knew it would be so hard to get a twenty-something man to have sex?

Forced by her employer to take a three month sabbatical, workaholic Tori Warren makes a checklist of things to accomplish that will make the time off worthwhile.

Sexy young Adam Cross comes into her life at just the right time. A physical trainer with a loving-life personality, he should work nicely in helping her meet all three goals. He'd be especially perfect for the best sex. Now if he would only just cooperate…

Adam learns of her calculating plans involving him soon after beginning to date Tori. But by then he's realised he wants much more than to be the means to an end for her. If he can only hold out until the end of the summer, maybe he'll have time to convince her that the best sex comes with strings…

Falling for the Other Brother

Erica had been planning to break it off with Trevor—he was really too young for her, after all. But it's hard to use that excuse when the man she's really interested in is Trevor's twin, Colin.

Her biological clock ticking, a chance conversation leads Erica to Trevor, a former sperm donor, who helps convince her to move ahead with her plans. But he adamantly refuses to be her donor, in fact he's pulled all his past donations, for a reason he won't discuss. Their subsequent relationship, while hot, just drives home the different goals the two have.

When Colin returns from overseas, his problem with intimacy still looming large, he never dreamt he would meet his ideal partner in Erica. Only two things stand in their way—her relationship with his brother, and the fact she wants children…the one thing he can no longer provide.

Sometimes in the depths of winter, warmth can force an unexpected bloom.

In shock after the death of her ex-husband, Maggie Winter gives in to her need for comfort with a near stranger, but immediately regrets her impulsive act. With her young daughter to raise alone, it’s time to start acting her age.

Something about Maggie puts all of Nick’s protective instincts on high alert, but that isn’t all he feels for her. So when she makes it clear she needs space, he isn’t put off by her cool act and has no problem biding his time.

However, when the slow simmer between them stretches on, it’s just a matter of time before one of them decides to turn up the heat.

With two diverging careers on the line, Teri and Aaron are torn between the right thing to do…and what feels so right to them.

With a son who’s played since he could walk, Teri lives, eats and breathes baseball. She was almost more excited than Emery when his invitation to a minor league team’s training camp came. But excited doesn’t begin to describe her reaction to Em’s new mentor, Aaron Reynolds. A spring fling? Just the ticket.

Fighting a chronic injury, Aaron is biding his time until he can return to the majors. Being assigned a mixed-up rookie to babysit is fine with him, especially one that comes with a sassy, sexy camp follower like Teri. But he soon finds he has his hands full…trying to keep Emery on the straight and narrow…and trying to keep his liaison with Teri strictly physical.