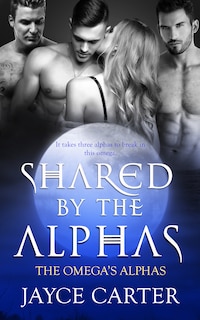 Shared by the Alphas

It takes three alphas to break in this virgin omega.

All Tiffany’s attempts to find love have ended in disaster and led to her being a sexually frustrated nineteen-year-old virgin omega sick of overbearing alphas. Her latest failure lands her in legal trouble, and the only way out is to sign a contract with a man she barely knows. While she doesn’t want to give up her freedom, a year of training at the hands of a handsome and dominant alpha is the best of her bad options.

Kieran agrees to take on the wild omega as a favor, not wanting her to end up as property in the system. He never expects to fall for her, but when two other alphas, Kane and Marshall, show up to compete for her affection, he can’t deny how he feels.

These very different alphas have to put their jealousy aside when Tiffany is targeted by an unknown enemy, because it will take all three of them to keep her alive. Even as danger surrounds them, Kieran, Kane and Marshall discover that sharing the feisty omega is more appealing than they’d thought it would be.

Can they work together to protect her from the danger threatening her or will their competition drive away the omega they all crave?