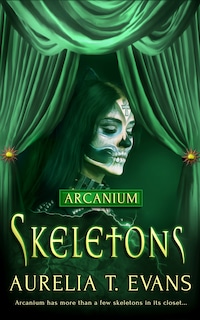 Arcanium has more than a few skeletons in its closet…

There’s a special hell in Arcanium for people who wish to lose weight while in jinni Bell Madoc’s presence.

The Skellies—the new, female-heavy metal cover band of deathly Living Skeletons—have been looking for a lead singer to round out the ensemble. They find their diva in Vivian Mendez, a difficult woman with a voice like a rock goddess and more skeletons in her closet than Bell has in his band.

Vivian always dreamed of being the lead singer in a band, and she’s damn good at it. But when she isn’t singing, a bottomless hunger consumes her. Nothing is ever enough.

The life of every Arcanium Skeleton revolves entirely around food and the odd chef who serves them. But Vivian refuses to play by his rules, refuses to beg him for more and refuses any attempt by the earnest odd chef to satisfy her hunger.

In Arcanium, sometimes the harder someone fights, the harder they fall.