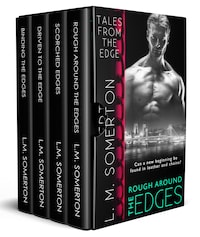 Tales from The Edge: Part Two

Rough Around the Edges

Can a new beginning be found in leather and chains?

The old saying that you can choose your friends but not your family is proved horribly true for Kai, as the mysteries of his past are revealed. As he and Harry start out on their journey together, they must contend with bullets as well as bondage, danger alongside domination, and it’s not easy to establish trust when the whole world is going to hell.

Love forged in fire is unassailable.

Fireman Salter Beauman, Beau to his friends, has had his eye on cute Marty Standish ever since he helped rescue Marty and his boss from the bombed out rubble of Temple Church. An analyst for the security services, Marty is cute, geeky and submissive through and through—even if he doesn’t know it yet.

With a serial fire starter making inroads into Beau’s life expectancy, he decides that there is no time to waste and introduces Marty to the D/s lifestyle. Marty responds with wide eyes, an insatiable desire to learn and the ability to turn Beau on with nothing more than a wiggle of his slim hips.

But Beau has a second, far more malevolent admirer. ‘See me dance’ is the message left at a series of increasingly dangerous fires. Beau and Marty must work together to catch a psychotic arsonist before their love goes up in flames. Literally.

Driven to the Edge

Not all limits can be negotiated.

The Edge is reaching a major milestone. After ten years in business together, Doms Joe Dexter and Heath Anders are planning a celebration and new beginnings. But even the best-laid plans can be thrown off course.

When Olly, Joe’s beloved sub, gets caught up in a hostage situation involving Special Forces soldiers, PTSD and blood diamonds, a party is the last thing on Joe’s mind. He hates the lack of control, and the thought of losing Olly takes him close to the edge.

Joe is not the only one reassessing his priorities. Olly needs Joe’s strength more than ever. He feels safe only in Joe’s arms or in his bondage.

Can Joe and Olly find sanctuary in each other or will their latest adventure drive them apart?

Never let go of the one you love.

After recent traumatic events, Olly is finding it hard to get his head around what happened. While he tries to deal with a maelstrom of emotions, renovations at The Edge are in full flow, alongside preparations for tenth anniversary celebrations. Joe, his Dom, recognizes Olly’s delicate state of mind and does his best to reassure him. A trip to the New Forest with their friends, Aiden and Heath, helps the healing process.

Returning home, Olly and Aiden focus on preparations for the party. When Aiden is called away, Olly takes a walk to clear his head, keeping his eye on a brewing storm. To his horror, he discovers Mark Vickery, an old enemy, has landed on the island by boat and is out for revenge.

With Olly missing and the storm raging, Joe, Heath and Aiden set out on a rescue mission that unfolds in a way none of them expected. Can the storm wash away the past or will Olly and Joe’s future be destroyed by a twist of fate?