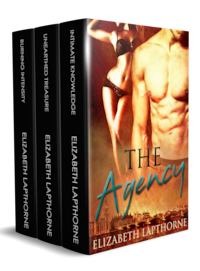 While camping Jennifer unwittingly stumbles upon a corrupt conspiracy. Only Saul — her best friend since childhood—can help her unravel the complex plot and keep her safe.

When Jennifer Mabbot goes camping in the Forest of Dean for some much needed soul-searching, she had no idea her life was about to take a very drastic turn. Witnessing a strange man burying a wooden box in the middle of the night, she thought it strange but nothing overly noteworthy.

Until, that is, she came home to be confronted by two men, clearly intent on hurting her for the whereabouts of the burial site. Turning to the only person she could trust—her life-long best friend, Saul Haslen—she asks for help and gets more than she could possibly bargain for.

Jennifer knows Saul does some sort of Government work, but actually he is an elite member of The Agency. With danger coming from all sides and neither of them fully understanding what's happening, they must work together to uncover the truth.

Before, Jennifer would have sworn she knew practically everything there was to know of Saul. But they are both learning more about each other, personally and sexually. Within that intimate knowledge lies the key to both their futures, and lasting happiness.

Chelsea and David have been working a year and a half to stop a smuggling ring. While discovering the last link, they unearth a far greater treasure—that of each other's love.

Chelsea Atchison and David Greer have been working deep undercover for the last eighteen months to break a smuggling ring. Finally uncovering a workable lead they join the crew with the intention of helping them break into and steal from the National Gallery of London. What they hadn't expected to uncover was the simmering desire for one another.

With no one but each other to trust, surrounded on all sides by their enemy and even their beloved work place—The Agency—starts to doubt them. The trust Chelsea and David had built between themselves explodes passionately into much, much more.

Still, they need to focus on the big picture, discovering the shadowy boss that the smuggling crew is answerable to and bringing him and the others to justice. When that involves breaking every law in the book, what's one more—sexual intimacy between colleagues?

El works for the Agency, fixing their toughest problems. James is a thief, and her ex lover. El is used to working through the messiest difficulties, but this might be too much for her to handle alone.

Eleanor Williams and her partner Robert Stevens have been called in to ‘fix’ the slight problem of a stolen Cezanne painting. Used to being assigned the difficult problems, El figures it’s another day at the office. Until she finds she needs an expert consultant. Someone used to the art world, and familiar with the criminal mind of a thief.

The relationship between them is messy, nothing like what she’s used to on the job. But with other agents involved in the successful resolution of this problem, she can’t afford to let personal hassles impede her work.

As she spends more time with James, she discovers he’s still the same man she loved to distraction, but he’s also far more layered and complicated than she could have guessed. Facing challenges in her usual forthright manner, she can only hope that he can keep up with her as the situation becomes even more convoluted. And as for the burning intensity that flares between them… Who said life should be easy?