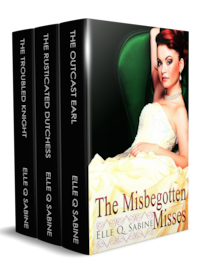 The Misbegotten Misses: A Box Set

Charles anticipates a carefree bride who can focus time and attention on him. Abigail is drawn into a dutiful marriage while preoccupied with her family. Can this couple find a way forward that suits them both?

Charles Wessex, the Earl of Meriden, has never before cared whether he was invited to the best entertainments or even the political dinners of his peers. He is determined, however, to have the woman of his fantasies under the thrall of his hands, mouth and body.

Lady Abigail de Rothesay is too busy coping with her sisters' difficulties and the practical problems of her engagement to look any deeper than her father's eminently sensible financial reasons. She reluctantly prepares for an arranged marriage to the widely disliked Earl of Meriden, expecting to live out the traditional future of a peer's wife—managing his households.

Abigail is not prepared for the intimate and demanding relationship Charles engineers, so Meriden must tread carefully and restrain his dominant instincts, both privately and in public, so as not to overwhelm and terrify his bride. Even as they grow closer physically and emotionally, his family's past and her family's secrets threaten to drive emotional and physical wedges between them. Together, they must face the consequences of their families' decisions for the past three decades as they come to terms with each other and their unexpected passion.

Lady Gloria Swenson has lived through eighteen months she can never forget or escape. Can Lord Clare help her to live, when all she wants to do is hide?

When Jeremy Blessing, better known as the Marquess of Clare, discovers a proud young lady wandering his father's lands, he finds himself looking for her angelic smile and golden head at every turn. But Lady Gloria Swenson has lived through eighteen months she'll never forget or escape, no matter how far she's already run.

When Clare insists on her time, then her trust, and finally offers a marriage to protect her, they'll have to confront the thorny issues of all complex relationships one difficult negotiation at a time, even as they flee across the Irish Sea and the through the Scottish borderlands in a futile search for safety.

Money, family, children, and a vindictive, greedy man all collude to separate them, but it is Gloria's reticence that Clare has to conquer more than any other obstacle. Will Gloria overcome her fears and her disillusionment? What will Clare have to sacrifice to bring them together?

Sir Peter Devon spends his nights fleecing London’s young bucks, but when Fate traps him in her delicious coils, he must surrender or flee.

Sir Peter Devon inherited a baronetcy, survived a war, was knighted and spent too much time fleecing London’s naive rich. Gambling was—his mother often said—an immature way to spend the dark hours he spent awake, but he was unsuited to the normal life of a rich gentlemen. But Fate, in the form of friendly fire, trapped him anyway.

In his attempt to rescue a young girl from a corrupt and immoral ex-officer, he found himself engaged and quickly married to the chit. Abandoning her to the chaperonage of his mother was straightforward enough, but the girl didn’t stay young. Fate’s trap became a delicious torment. If he could only be certain that he wouldn’t lose his mind, he would want to keep her.

Genevieve, once an earl’s daughter but truly the bastard daughter of a duke and now a wife-in-name-only, is tired of waiting for Sir Peter Devon to see that she’s no longer sixteen. He’s watched over her, guarded her, supported her, appeared on command to escort her, called on her for twenty minutes at a time in his mother’s drawing room and even pandered to her desire to immerse herself in art and the country, when she believes he prefers the smoky gaming hells of London. Her hero has always been Sir Peter. He can be more than an absentee husband, and she doesn’t understand why he is so reticent when he clearly desires her. One way or another, they are together for life. Eventually he will let her be close to him. Won’t he?