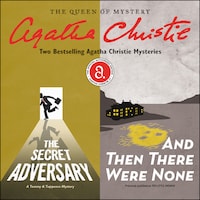 Tommy and Tuppence are young, in love… and flat broke. Restless for excitement, they decide to embark on a daring business scheme: Young Adventurers Ltd.—"willing to do anything, go anywhere." But they get more than they bargained for when their first assignment for the sinister Mr. Whittington draws them into a diabolical conspiracy.