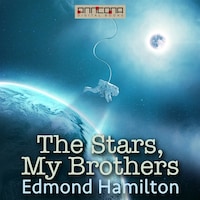 The Stars, My Brothers

The Stars, My Brothers is a classic science fiction novella by American author Edmond Hamilton first published in Amazing Stories 1962.

The Stars, My Brothers is considered one of Edmonton’s best stories, and certainly most imaginative, stories. A spaceman is killed in space and frozen. He is left orbiting the space station where he was killed in the hope that a method will be found to bring him back to life. That day finally comes a hundred years later, when he awakens to a very different world and comes to realize he has become both a symbol and a pawn in a human/alien conflict.

The Stars, My Brothers gives us a re-animated astronaut plucked from a century in the past and presented with an alien world where the line between humans and animals is blurred.

“He was afraid-not of the present or the future, but of the past. He was afraid of the thing tagged Reed Kieran, that stiff blind voiceless thing wheeling its slow orbit around the Moon, companion to dead worlds and silent space.”

Published in the May, 1962 issue of Amazing Stories

Edmond Moore Hamilton (1904-1977) was a popular science-fiction author during the "Golden Age" of American science fiction.

Hamilton’s career began as a regular and frequent contributor to Weird Tales magazine. The first hardcover publication of Science Fiction stories was a Hamilton compilation, and he and E.E. “Doc” Smith are credited with the creation of the Space Opera type of story.

Hamilton worked for DC Comics authoring many stories for their Superman and Batman characters. Hamilton was instrumental in the early growth of the Legion of Super-Heroes feature, as one of its first regular writers.