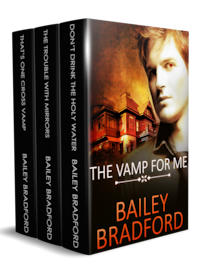 The Vamp for Me: Part Two: A Box Set

The Vamp for Me: Part Two

Being left for dead sure has a way of changing a man.

All West wanted was one night of fun. He’d taken on the responsibility of raising his younger siblings after their parents died, had done so out of love, but he was a young man and he just wanted a chance to live like one for a few hours.

It almost cost him his life. It certainly meant his life was changed forever, and along with his life, the lives of his siblings. They were all exposed to a secret world they’d never known existed. Vampires.

Human children living alongside vampires…seemed unusual. Claude, the coven leader who saved West and his brothers and sisters, doesn’t have accommodations for kids. He finds one coven in the country that does, and sets about making a home there for West and his family. Before he sends West away, West meets an intriguing man, Axel, whom he encounters again months later. The attraction between them is strong, but there is more to consider than just how sexy Axel is.

Nothing in life is easy, whether you’re a vampire or a human.

The Trouble with Mirrors

Paolo has watched his friends and coven leader find mates, their other halves. He’s ready to find someone just for him, though that means getting out and actually going somewhere.

When his coven leader, Claude, asks him to help out with a bit of a spy mission, Paolo agrees. He puts on his sexiest—and skimpiest—club outfit and dives right in.

But the mission brings him head to head with his coven’s worst enemies, the Dark Slayers. And when he finds himself attracted to one who’s about to be initiated against his will, Paolo can’t resist helping the man out…and having some really hot sex while he’s at it.

Then the Dark Slayers find them…

Erin Meyers knows all about the existence of vampires. He’s the guy who helped his twin brother Andrew find true love with the kilt-wearing Radney.

A doctor’s visit leaves him fearing for his life. When he encounters a friendly vamp he knows out at the club, Erin breaks his no-vamps rule and takes Jude home with him. Together, they burn up the sheets, and Erin finds himself willing to spend more than one night with Jude. Soon, a relationship blooms, but the bad news Erin gets might put an end to any dreams he had for the future.