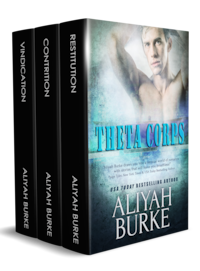 This spy has fallen for the princess who helped save him.

Ethan Jackson has been a prisoner for longer than he cares to think about. An opportunistic perimeter alarm allows him and one other to escape. Almost recaptured, they are saved by the timely arrival of his family. Now he just has to figure out who the woman with him is and where the man behind his own kidnapping has gone.

Zahra ‘Rally’ Kidjo has a kinship with the man who saved her but her trust only goes so far. As the youngest child of a ruling royal family, she’s used to betrayal from the inside. Once brash and outspoken on her beliefs, she’s now reserved and soft-spoken.

When this horrible ordeal is over, can Ethan keep this princess in his life or will he lose her to her familial obligations?

One who rages like the fire and the only man who can tame her.

Anabelle Lee Jackson is an assassin for Theta Corps. Not much can get under her skin aside from her boss, Masters. Their bickering has been years of foreplay for her, but neither of them step over that line—though they may have come close. Until they are on an op in Russia together and they erase that line completely.

Masters and Anabelle Lee clash on everything, leading to her leaving. Will he show contrition for his behavior? Will she? Or will these two lovers only have their memories of what could have been to keep them warm at night?

What happens after all those years of sniping at one another when they are alone together?

Beauregard Jackson has a reputation for being a ladies’ man. It’s never bothered him until an ex shows up from his past and makes his life hell. When she goes after the one woman he’s never dated but has loved truly, Beau takes action.

Shannon ‘Mino’ Tumelo spent years putting off her own dreams to work at Theta Corps. After she quit, she went back to medical school—and now she’s months away from finishing when she’s yanked back into that world.

While she and Beau work together, she struggles to fight her feelings for him, aware he’s not a long-term kind of man. Beau, however, wants to change her mind, because she’s the one he wants. Can he convince her of his love for her?