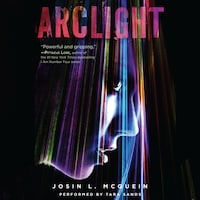 A harrowing sci-fi thriller about a teen who's survived horrors but lost her memory, for fans of Veronica Roth, Stephen King, and Justin Cronin.

Arclight is a bold and astonishing debut about identity, unnerving connections, tortured romance, and the courage we find when we face our worst nightmares.

The Arclight is the last refuge in a post-apocalyptic world consumed by terrifying monsters called the Fade. No one crosses the wall of light that keeps the last human survivors safe. There's nothing else left and nowhere to go. Or so they thought, until Marina, a lone teenage girl, stumbles out of the Dark.

Marina doesn't remember who she is, where she came from, or how she survived. And the Fade want her back. When one of them infiltrates the compound and recognizes Marina, she begins to unlock secrets she didn't even know she had. Marina knows she's an outsider in the Arclight, but she'll do anything to protect those who saved her. Whether they want her help or not.