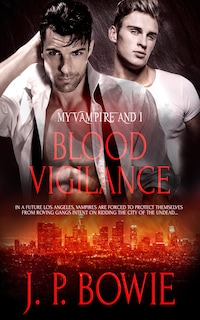 In a future Los Angeles, vampires are forced to protect themselves from roving gangs intent on ridding the city of the undead.

In the year 2038, vampires might have civil rights, but that doesn’t mean the population treats them with civility. Master Vampire Marcus Verano wants to put an end to the violence, but the charter they signed states that no human must be harmed in any confrontation.

To that end, the Vigilance group is formed to patrol the streets of downtown Los Angeles and take care of trouble from roving street gangs before it escalates.

Ross Delaney, owner of popular downtown bar The Bitter Brew, comes to the aid of vampire Tristan Munro when he is attacked. Ross is intrigued by the vampire and asks him to return the following night—which he does…and many nights thereafter.

As a Vigilance member, Tristan is partnered with Leah, a fiery red-haired female who resents being subjugated by humans—and male vampires. It isn’t long before she rebels against the Vigilance and seeks vengeance on humans, holding Ross hostage and defying Marcus and Tristan.

Can she be stopped, or will her actions destroy the Vigilance…and the growing relationship between Ross and Tristan?