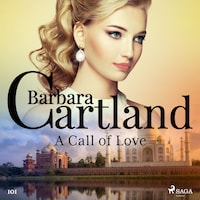 4h 27m
NarratorAnthony Wren
TypeAudiobook
SeriesBarbara Cartland's Pink Collection
Categories
NovelsRomanceHistorical NovelsCrimeCrime NovelsRomanceRomanceHistoric RomanceEnglishFictionCrimeFantasy & Science fiction
Share this book
The British Prime Minister, Benjamin Disraeli, asks Lord Kenington to travel to India to find out if growing reports about the Russian menace are really true. The Liberal Opposition in Parliament are sceptical and are certain that Disraeli is manufacturing a scare about nothing in asserting that the prime objective of the Russians in invading Asia is to wrest India from the British.

On the P & O Liner to India, to Lord Kenington’s surprise, a very beautiful young girl comes up to him and asks if she can be seen speaking to him.
Aisha explains that, owing to various mishaps, she is travelling alone and un-chaperoned and is being pursued by a tiresome man, Arthur Watkins, and she is frightened at the way he is behaving.

Learning that she is the daughter of one of the most successful Officers in the Army in India, Lord Kenington is only too pleased to help her. He understands that Aisha’s father, Major Warde, is one of the key men in The Great Game, a British Secret Service dedicated to defending India from the Russians. Because they find each other so interesting, Lord Kenington is as worried as Aisha is when they reach Calcutta to find that her father is not waiting for her. Lord Kenington fears that if he is missing there may be an alarming reason for it and they then travel together to Simla to stay with the Viceroy, Lord Lytton.

How when they are there Major Warde turns up unexpectedly, having saved a Fort on the North-West Frontier. How Aisha is kidnapped from Viceregal Lodge and how eventually she finds happiness after her terrifying ordeal is all told in this intriguing romance by BARBARA CARTLAND. Barbara Cartland was the world’s most prolific novelist who wrote an amazing 723 books in her lifetime, of which no less than 644 were romantic novels with worldwide sales of over 1 billion copies and her books were translated into 36 different languages. As well as romantic novels, she wrote historical biographies, 6 autobiographies, theatrical plays and books of advice on life, love, vitamins and cookery. She wrote her first book at the age of 21 and it was called Jigsaw. It became an immediate bestseller and sold 100,000 copies in hardback in England and all over Europe in translation. Between the ages of 77 and 97 she increased her output and wrote an incredible 400 romances as the demand for her romances was so strong all over the world. She wrote her last book at the age of 97 and it was entitled perhaps prophetically The Way to Heaven. Her books have always been immensely popular in the United States where in 1976 her current books were at numbers 1 & 2 in the B. Dalton bestsellers list, a feat never achieved before or since by any author. Barbara Cartland became a legend in her own lifetime and will be best remembered for her wonderful romantic novels so loved by her millions of readers throughout the world, who have always collected her books to read again and again, especially when they feel miserable or depressed. Her books will always be treasured for their moral message, her pure and innocent heroines, her handsome and dashing heroes, her blissful happy endings and above all for her belief that the power of love is more important than anything else in everyone’s life."