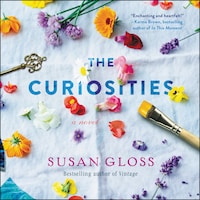 The follow-up to Susan Gloss’s successful debut, Vintage, is a charming mid-western story of artists, inspiration, and how to reinvent your life with purpose and flair.

Nell Parker has a PhD in Art History, a loving husband named Josh, and a Craftsman bungalow in Madison, WI. But her last pregnancy ended later in the second trimester, and rather than pausing to grieve, she pushes harder for testing and fertility treatments. Urging Nell to apply for jobs, Josh believes his wife needs something else to focus on other than a baby that may never be.

Finding a job turns out to be difficult for an art historian. . . until Nell sees the ad seeking a director for a new nonprofit called the Mansion Hill Artists' Colony. The colony is the brainchild of the late, unconventional society dame Betsy Barrett, who left behind her vast fortune and a killer collection of modern art to establish an artist-in-residency program to be run out of her lakeside mansion. The executor of Betsy's estate simply hands Nell a set of house keys and wishes her luck, leaving her to manage the mansion and the eccentric personalities of the artists who live there on her own.

Soon one of the artists, a young metal sculptor named Odin, is keeping the other residents awake with his late-night welding projects. Nell is pretty sure that Annie, a dreadlocked granny known for her avant garde performance pieces, is dealing drugs out of the basement "studio." Meanwhile Paige, an art student from the university, takes up residence in the third-floor turret, experimenting with new printing and design techniques, as well as leading a string of bad boyfriends upstairs when she stumbles home late at night.

Despite all the drama, Nell finds something akin to a family among the members of the creative community that she’s brought together. And when her attraction to Odin begins to heat up, Nell is forced to decide what will bring her greater joy—the creative, inspired world she's created, or the familiar but increasingly fragile one of her marriage.