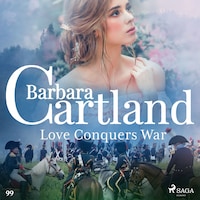 4h 10m
NarratorAnthony Wren
TypeAudiobook
SeriesBarbara Cartland’s Pink Collection (part 99)
Categories
NovelsRomanceHistorical NovelsRomanceRomanceRomantic SuspenceHistoric RomanceEnglishFictionFantasy & Science fiction
Share this book
After the Battle of Waterloo and the subsequent Army of Occupation in France, the Earl of Monthurst returns to his ancestral home in England to find it in a very bad condition. Because labour had not been available during the war, The Hall, which goes back to Tudor times, was badly in need of repair, while the farms on his extensive estate were untenanted and the fields unploughed.

Not only had all the local men been taken by the Army, but a large number had not returned. The villagers had faced near starvation and many older people had died from want of attention.The Earl had unwisely brought back with him a French Comtesse who was very beautiful and possessive and was obviously determined that he should marry her. He had thought that he and the Comtesse could arrive quietly and remain unnoticed in his home.

However, he finds the Vicar’s daughter, the lovely Raina Locke, is determined to make him realise his responsibility towards his people who have suffered so acutely during the war and he finds to his surprise they are confident that he will rescue them as well as his own estate from ruin. How Raina, through sheer persistence convinces the Earl to fulfil his responsibilities to his people and accept his ancestral duty. How Raina with the aid of her redoubtable Nanny saves the Earl on the first night of his arrival home from the disapproval of the local Lord Lieutenant and an inveterate gossip. And how she saves the Earl from a despicable plot by the evil French Comtesse and how she completely and absolutely falls in love is all told in this romantic and inspiring tale by BARBARA CARTLAND. Barbara Cartland was the world’s most prolific novelist who wrote an amazing 723 books in her lifetime, of which no less than 644 were romantic novels with worldwide sales of over 1 billion copies and her books were translated into 36 different languages. As well as romantic novels, she wrote historical biographies, 6 autobiographies, theatrical plays and books of advice on life, love, vitamins and cookery. She wrote her first book at the age of 21 and it was called Jigsaw. It became an immediate bestseller and sold 100,000 copies in hardback in England and all over Europe in translation. Between the ages of 77 and 97 she increased her output and wrote an incredible 400 romances as the demand for her romances was so strong all over the world. She wrote her last book at the age of 97 and it was entitled perhaps prophetically The Way to Heaven. Her books have always been immensely popular in the United States where in 1976 her current books were at numbers 1 & 2 in the B. Dalton bestsellers list, a feat never achieved before or since by any author. Barbara Cartland became a legend in her own lifetime and will be best remembered for her wonderful romantic novels so loved by her millions of readers throughout the world, who have always collected her books to read again and again, especially when they feel miserable or depressed. Her books will always be treasured for their moral message, her pure and innocent heroines, her handsome and dashing heroes, her blissful happy endings and above all for her belief that the power of love is more important than anything else in everyone’s life."