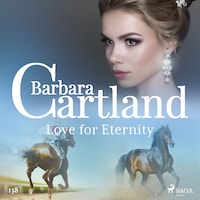 4h 29m
NarratorAnthony Wren
TypeAudiobook
SeriesBarbara Cartland's Pink Collection (part 138)
Categories
NovelsNovelsRomanceHistorical NovelsRomanceRomantic SuspenceHistoric RomanceEnglishFictionFantasy & Science fiction
Share this book
The beautiful eighteen year old Karla Stanton, who is living in the country with her brother training horses, is astonished when her half-sister Penelope, now Lady Melford, who is renowned as a great beauty in London, unexpectedly calls on her. She wishes Karla to disguise herself as her aged aunt and chaperone and to go with her to Paris where she intends to spend three days, ostensibly shopping for clothes, but actually to be with the Marquis of Welbourne, who she is having a passionate affaire-de-coeur with.

Karla who has never been out of England and who knows nothing of the Social world and its ways is astounded at the request and frightened that she would be unmasked. However, she obeys her sister when she produces a wig, dark spectacles and theatrical make-up to hide her face and make look much older. Karla is thrilled with the beauty and glamour of Paris where everything is new and intriguing to her. But the Marquis has a rival in the Duc de Alezia, who does his best to monopolise Penelope.

How the first women’s horse race takes place privately on the famous Racecourse at Longchamps. And how Karla saves her sister’s face and the Duc’s bet on his Arab stallion at the last moment and finally finds love is told in this unusual and fast-moving story by BARBARA CARTLAND. Barbara Cartland was the world’s most prolific novelist who wrote an amazing 723 books in her lifetime, of which no less than 644 were romantic novels with worldwide sales of over 1 billion copies and her books were translated into 36 different languages. As well as romantic novels, she wrote historical biographies, 6 autobiographies, theatrical plays and books of advice on life, love, vitamins and cookery. She wrote her first book at the age of 21 and it was called Jigsaw. It became an immediate bestseller and sold 100,000 copies in hardback in England and all over Europe in translation. Between the ages of 77 and 97 she increased her output and wrote an incredible 400 romances as the demand for her romances was so strong all over the world. She wrote her last book at the age of 97 and it was entitled perhaps prophetically The Way to Heaven. Her books have always been immensely popular in the United States where in 1976 her current books were at numbers 1 & 2 in the B. Dalton bestsellers list, a feat never achieved before or since by any author. Barbara Cartland became a legend in her own lifetime and will be best remembered for her wonderful romantic novels so loved by her millions of readers throughout the world, who have always collected her books to read again and again, especially when they feel miserable or depressed. Her books will always be treasured for their moral message, her pure and innocent heroines, her handsome and dashing heroes, her blissful happy endings and above all for her belief that the power of love is more important than anything else in everyone’s life.