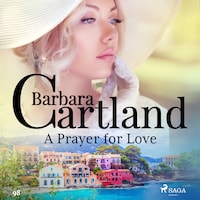 4h 14m
NarratorAnthony Wren
TypeAudiobook
SeriesBarbara Cartland’s Pink Collection
Categories
NovelsRomanceHistorical NovelsRomanceRomanceRomantic SuspenceHistoric RomanceEnglishFictionFantasy & Science fiction
Share this book
Dalma Wickham, having been in Athens to learn Greek, arrives at a British Steamer to return to London to find that they will not allow her dog, Twi-Twi, on board. Because she is turned away from the British ship, she walks round the quay and sees a most magnificent yacht. While she is admiring it, a bomb goes off at the end of the quay and the seamen leave the yacht to see what has happened.

On an impulse, because she realises it is her last chance of getting Twi-Twi to England, she slips aboard the yacht and hides in one of the empty cabins. The yacht goes to sea and she is just beginning to feel hungry when Twi-Twi starts barking.

Dalma has made up her mind that the owner of the yacht must be very rich and old but, when the door opens, she sees a young man who is very handsome and he is the Earl of Ravenscraig. Because her father, Lord Wickham, is a trusted advisor to the Prime Minister and Queen Victoria, she recognises that there would be a great scandal if she travels alone with such a handsome man.

Because she is herself so beautiful and interesting, the Earl says he will not turn her off his yacht, but he has a problem to resolve in Fez before he returns to London. It turns out that he is trying to rescue a young woman, the daughter of his secretary, who has been captured by evil white slave traders. How Dalma helps the Earl in freeing the girl when she is about to be sold. How they reach England in safety, but Dalma knows that she is already in love with the Earl. How she discovers that he is married to a Greek Princess and is faced with an appalling problem for which there is apparently no answer. And how they both wish on a star that one day they will be together for ever is told in this exciting romance by BARBARA CARTLAND. Barbara Cartland was the world’s most prolific novelist who wrote an amazing 723 books in her lifetime, of which no less than 644 were romantic novels with worldwide sales of over 1 billion copies and her books were translated into 36 different languages. As well as romantic novels, she wrote historical biographies, 6 autobiographies, theatrical plays and books of advice on life, love, vitamins and cookery. She wrote her first book at the age of 21 and it was called Jigsaw. It became an immediate bestseller and sold 100,000 copies in hardback in England and all over Europe in translation. Between the ages of 77 and 97 she increased her output and wrote an incredible 400 romances as the demand for her romances was so strong all over the world. She wrote her last book at the age of 97 and it was entitled perhaps prophetically The Way to Heaven. Her books have always been immensely popular in the United States where in 1976 her current books were at numbers 1 & 2 in the B. Dalton bestsellers list, a feat never achieved before or since by any author. Barbara Cartland became a legend in her own lifetime and will be best remembered for her wonderful romantic novels so loved by her millions of readers throughout the world, who have always collected her books to read again and again, especially when they feel miserable or depressed. Her books will always be treasured for their moral message, her pure and innocent heroines, her handsome and dashing heroes, her blissful happy endings and above all for her belief that the power of love is more important than anything else in everyone’s life.