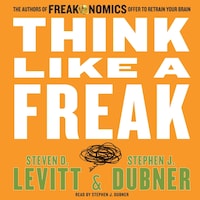 The New York Times bestselling Freakonomics changed the way we see the world, exposing the hidden side of just about everything. Then came SuperFreakonomics, a documentary film, an award-winning podcast, and more.

Now, with Think Like a Freak, Steven D. Levitt and Stephen J. Dubner have written their most revolutionary book yet. With their trademark blend of captivating storytelling and unconventional analysis, they take us inside their thought process and teach us all to think a bit more productively, more creatively, more rationally—to think, that is, like a Freak.

Levitt and Dubner offer a blueprint for an entirely new way to solve problems, whether your interest lies in minor lifehacks or major global reforms. As always, no topic is off-limits. They range from business to philanthropy to sports to politics, all with the goal of retraining your brain. Along the way, you’ll learn the secrets of a Japanese hot-dog-eating champion, the reason an Australian doctor swallowed a batch of dangerous bacteria, and why Nigerian e-mail scammers make a point of saying they’re from Nigeria.

Some of the steps toward thinking like a Freak:

First, put away your moral compass—because it’s hard to see a problem clearly if you’ve already decided what to do about it. Learn to say “I don’t know”—for until you can admit what you don’t yet know, it’s virtually impossible to learn what you need to. Think like a child—because you’ll come up with better ideas and ask better questions. Take a master class in incentives—because for better or worse, incentives rule our world. Learn to persuade people who don’t want to be persuaded—because being right is rarely enough to carry the day. Learn to appreciate the upside of quitting—because you can’t solve tomorrow’s problem if you aren’t willing to abandon today’s dud.

Levitt and Dubner plainly see the world like no one else. Now you can too. Never before have such iconoclastic thinkers been so revealing—and so much fun to read.