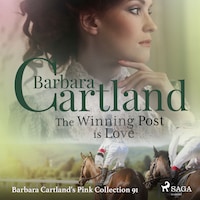 4h 12m
NarratorAnthony Wren
TypeAudiobook
SeriesBarbara Cartland’s Pink Collection
Categories
NovelsRomanceHistorical NovelsRomanceRomanceHistoric RomanceEnglishFictionFantasy & Science fiction
Share this book
Lord Waincliffe breaks his horse’s bridle out one day and calls at the nearest house for help so that he can ride home in safety. It belongs to Terence Stourton, a Professor of Literature, and he meets his daughter, Rosetta, who repairs the bridle for him. Not only does he think that Rosetta is the most beautiful girl he has ever seen, but he feels there is something unusual about her. Only when he returns home, does he realise that she bears an extraordinary resemblance to his sister, Dolina.
Lord Waincliffe and his brother, Henry, are finding it very difficult to afford their house and estate and they have the idea that the Marquis of Millbrook, who lives nearby and is very rich, could help them to build a Racecourse on both their
estates that would solve all their financial woes. So they invite the Marquis, who is noted for his love of beautiful women, and they expect their lovely sister to help them persuade him, but Dolina insists on going to London for a ball instead. They enlist Rosetta to impersonate Dolina for the evening and the Marquis is so deeply impressed by her and her beauty that he agrees to fund the Racecourse.
Then the problems for Rosetta really begin and when all seems impossible and her heart is forever broken, everything is resolved in this fascinating and intriguing tale by BARBARA CARTLAND. Barbara Cartland was the world’s most prolific novelist who wrote an amazing 723 books in her lifetime, of which no less than 644 were romantic novels with worldwide sales of over 1 billion copies and her books were translated into 36 different languages. As well as romantic novels, she wrote historical biographies, 6 autobiographies, theatrical plays and books of advice on life, love, vitamins and cookery. She wrote her first book at the age of 21 and it was called Jigsaw. It became an immediate bestseller and sold 100,000 copies in hardback in England and all over Europe in translation. Between the ages of 77 and 97 she increased her output and wrote an incredible 400 romances as the demand for her romances was so strong all over the world. She wrote her last book at the age of 97 and it was entitled perhaps prophetically The Way to Heaven. Her books have always been immensely popular in the United States where in 1976 her current books were at numbers 1 & 2 in the B. Dalton bestsellers list, a feat never achieved before or since by any author. Barbara Cartland became a legend in her own lifetime and will be best remembered for her wonderful romantic novels so loved by her millions of readers throughout the world, who have always collected her books to read again and again, especially when they feel miserable or depressed. Her books will always be treasured for their moral message, her pure and innocent heroines, her handsome and dashing heroes, her blissful happy endings and above all for her belief that the power of love is more important than anything else in everyone’s life."