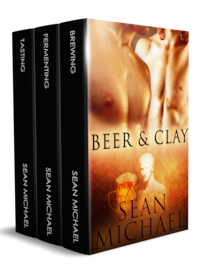 As the love between Toby and Damon deepens, the man intent on destroying their happiness increases his efforts.

Toby and Damon are back in Brewing, their relationship deepening more despite the continuing efforts of a stranger to bring them down.

Helping in their efforts are their best friends Peter and Christian. Peter’s new investment in a three-story building on the same block as Damon’s bar offers Toby the opportunity of having a studio close to home. It also gives Peter and Christian a home they’ve made together, which Peter hopes will bring them closer together.

A former soldier, Christian has a hard time letting go and finding his subspace. It’s going to take a lot to break the conditioning he’s learned in the Army. Peter is stubborn, though, and he’s seriously falling for his strong sub.

Will yet another attack bring down two couples this time?

Christian needs what Peter has to give him, but will he let himself have it?

With Toby’s stalker behind bars, Damon and Toby can relax and enjoy their relationship, sinking into basking and reveling in each other.

Things are just heating up for Peter and Christian, though. A former soldier, Christian still hasn’t found his subspace and he’s worried it either doesn’t exist or he’s simply doing it wrong. Peter has as much patience as he needs, though, and he slowly pushes Christian to the edges of his limits, doing everything he can to help Christian grow and flourish.

Christian’s training and the café they’re opening create good excuses for Christian to keep from submitting, even though, deep down, it’s what he really wants. Peter’s perseverance will have to work overtime to overcome them.

Will Christian ever give in to the things he knows he needs? Only time will tell.

Find out how it all began for Peter and Christian.

Before Toby met Damon, Peter and Christian found each other on the internet.

Luckily for Christian, seasoned Dom Peter recognizes Christian’s lack of experience and a kindred spirit in the man, and they take their conversations to text messages and Skype calls.

After Christian’s last deployment and only a few months before his discharge, he takes leave and visits Peter so the two men can see if they are as compatible in person as they seem to be online.

This is the beginning of a beautiful relationship.