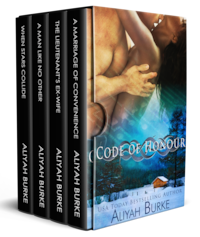 Code of Honour: A Box Set

A Marriage of Convenience

A Naval pilot, a one night stand and years later a second chance, can they make it work this time?

Pharmacological student, Ayanna Barker, was working hard to give her and her son a good life. Sure, things were tight, but it was all worth it. The man who had given her her child has also given her the best night of her life…and she had never forgotten him.

US Navy pilot Lieutenant Michael Taylor loved the rush his job gave him but even that took a back seat to how he felt about the lovely Ayanna Barker, but circumstances keep them apart.

Four years later Michael sees her at a different military institution. Ayanna is more beautiful than his vivid memories had recalled her to be, but now she has a child…she has his child. Determined to be a part of her life, and his son's, Michael moves them into his home and marries her. Each day reawakened emotions burn hotter and hotter as they try and keep things under control.

But can Michael and Ayanna realise what they share is so much more than just a marriage of convenience?

Their relationship began and ended because of an assignment six years ago, what will happen when they are reunited?

Lieutenant Pete "Racer" Kysenzki loves his job as a pilot. But with the news he gets from JAG pertaining to an incident six years ago he finds himself above the Arctic Circle tracking down a woman he has tried his best to forget. He needs some answers and fast.

Sidra Bonnaire is doing her best to stay one step ahead of a rogue agent who wants her dead and the computer chip she has. When she looks up into the face of a man from her past she is immediately reminded of how it had been between them. No matter how intense the passion still is, when she learns his reason for coming, she knows it's time to run again.

Pete can't leave her to face the danger alone, especially since he brought it to her. Convincing her to let him help is a lot easier than persuading her that maybe they deserve a second chance. Will he get an answer from her or will she be taken from him forever?

Two headstrong, single-minded agents, one incredibly fiery passion, can they stay alive long enough to see where it leads?

Special Agent Taber Kysenzki is the DEA's bad boy, he has no qualms of straddling the line of right and wrong, doing whatever necessary to get the job done. But when he botches up an undercover operation, he's faced with a woman unlike any he's met before.

She saves his life but doesn't deign to give him the time of day. He'd heard rumours of an agent with his reputation in the ATF but hadn't met her until today.

Special Agent Serefina LeBenoit is the ATF's equivalent to Kysenzki. She knows all about him, how he goes through women and she doesn't have any desire to be another notch on his belt. She has a rule of not sleeping with certain men, he fits that criteria. All that changes one night a few months after their first volatile meeting, when he tracks her down in a bar in New Mexico.

Circumstances bring them together again when a killer from her past resurfaces. Together they work, skirting the line of the law, to get the murderer off the street. Sparks fly hot between them as they close in on the target. When the bullets stop flying and the smoke clears, will they ignore the chance of a lifetime?

Undeniable attraction, a one night stand, a missing sibling, and different continents to name a few, can these two overcome all the obstacles and accept the love between them?

US Marshall Cortland Kysenzki never imagined that returning to Texas for a friend's birthday party would change his outlook on life. But it did, all it takes is one look and he is a goner. Only one problem, it is his friend's sister who snares his attention.

Zémire Gibson comes to celebrate her brother's birthday. Despite her resolve to not get involved with anyone, coming face to face with a man she's dreamed about since childhood, turns that into nothing. So she allows herself one night in Cort's amazing embrace beneath the Texas sky.

When her brother goes missing, Cort flies to France to tell her and ask for her help with something he received from BB Gibson before his disappearance. It didn't matter what circumstances brought him back within reach of Zémire, Cort is determined not to let her go again, having been unable to vanquish her from his memory. He escorts her back to Texas where they grow closer as she hopes and prays for her brother to resurface.

But Zémire isn't the same child she used to be, she's a grown woman with a mind and a life all her own…one in France. Will Cort have what it takes to convince her once and for all they are meant to be, or will she be gone from his life forever?