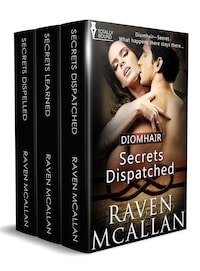 At some time in their life, everyone has choices to make.

For Shane, it could be a chance to rediscover her love of kink.

For Ross, it’s the chance to tempt her to be his kitten.

But Shane has to settle some demons before she can move forward.

Until then, well a little playing wouldn’t matter—would it?

However, play can become serious, and decisions have to be made that could change both their lives forever.

This is their chance to be together as Dom and sub or wave goodbye. But at Diomhair, nothing is as straightforward as you hope, and Ross and Shane have a lot to do, before they can say yes—or no.

What happens at Diomhair, stays there. Pleasure or pain? Mimi needs to know and Alex wants to show her.

It’s up to scribing artist Alex Sunderland to ensure it’s the latter. He’s everyone’s idea of how a Dom should be—even Mimi can see that—but is he the one to show her the lifestyle?

Alex is intrigued by Mimi and is sure that deep down she’s the perfect sub…for him.

Mimi wants to be, but can she conquer her fear of pain and let herself fly?

Only trying will tell.

Diomhair—Secret. What happens there stays there. Whether you want to learn or teach, be in control or controlled, Diomhair could be the place for you.

Nothing in life is easy.

Finn was a gamekeeper, not a sub…

Or so she thought.

Not only that, she had enough on her plate coping with a play-away boss and his sex life, missing sheep, and someone out to harm her.

As for a growing attraction for a man she hadn’t got time for?

There was no way she was going to examine, let alone act on, those feelings. She didn’t want a Dom, not even him. It was time to harden her heart.

Coll was a Dom, and he knew it. He also knew that given the chance, Finn would fly for him. Mind you, as she seemed to either threaten him with a shotgun or disappear whenever they met, he despaired that he would never get that chance.

However, when circumstances throw them together, it’s up to Coll to show Finn she’s a perfect sub, and he’s the Dom for her.

All the while keeping her safe from her enemies.

Not too much to ask, is it?