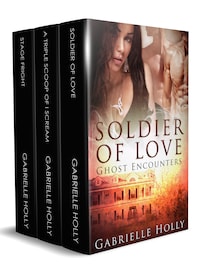 When Toni Bianchi decides to chuck her high-stress career and mooching noncommittal boyfriend to become an innkeeper in a tiny tourist town, she doesn't realise that she's trading in one set of problems for another. The inn is a crumbling money pit haunted by the handsome ghost of its former owner—Civil War soldier John Buckman. As the hauntings get more frequent — and much more personal — Toni wonders if she's just imagining things.

At her wit's end, Toni calls in the popular ghost-hunting TV show "Paranormal Research Team" and immediately falls for its sexy star, Thomas Becker. Toni, Thomas and Buckman's ghost engage in an otherworldly ménage that helps the dead cross over and leaves the living wanting more.

A Triple Scoop of I Scream

A reluctant spiritual medium, a sexy TV ghost hunter and a handsome telepath create a love triangle so hot even the dead can't ignore it.

Newly-single and without a job or a place to call home, spiritual medium Toni Bianchi finds herself the owner of a rundown ice cream parlour in an historic Wisconsin river town. The shop is haunted by the ghosts of two lovers who can't rest until their tragic mystery is unravelled.

While Toni looks for answers and works to get the shop up and running, she finds herself drawn to her handsome neighbour, book store owner Liam Greco. Toni soon learns that Liam has a psychic secret of his own.

When the hauntings get physical, Toni enlists the help of the ghost hunters from TV's 'Paranormal Research Team' and reunites with the show's sexy star Thomas Becker. Passion and physic energy surge when Toni, Thomas and Liam engage in a decadently delicious ménage that helps the dead cross over and leaves the living craving more.

Psychic medium Toni Bianchi’s love triad with sexy TV ghost hunter Thomas Becker and hot telepath Liam Greco is on the rocks. The men’s jealousies flare and Toni is caught in the middle. Faced with some tough decisions, she longs for escape. When her mysterious friend Mike Briggs asks her to help renovate the haunted movie theatre he’s just purchased, she jumps at the chance to get out of town and get some distance from her lovers.

An angry spirit haunts the old movie house seeking pardon for a crime he didn’t commit. When Toni makes intimate contact with the theatre's resident ghost—1950s troublemaker, Kip Monroe—she falls under the spell of his unique sexual magic. He convinces her that he was wrongly accused and makes Toni promise to help clear his name. In the process, she uncovers long-buried secrets about the living and the dead. She learns that all of the men in her life—ghosts, humans and everything in between—are just full of surprises.