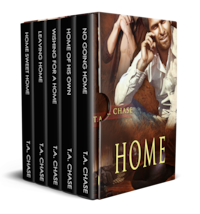 Six years ago, a hoof to the head ended Leslie Hardin's showjumping career and his relationship with the man he loved. Broken, hurt and rejected, Les has focused his energies on rebuilding his life.

Les' accident has shown him that the most valuable treasures are usually found under an imperfect surface, and his reputation for taking in strays starts to grow. But it's one of these strays in particular, injured rodeo cowboy Randy Hersch, who captures more than just his compassion.

Between his disapproving father and his chosen career path, Randy has always felt the need to deny his passion. When Les takes him under his wing, Randy begins to realize that he is truly strong enough to admit his true self—to himself and to the rest of the world. But in the arms of a broken man, can he find acceptance…and love?

Home of His Own

Tony Romanos is a bull rider searching for a place to call his own, and a man to love him no matter what.

Tony Romanos is searching for a place to lay his hat and his heart. Traveling on the professional bull riding tour is tough on relationships. He's never found a man he's willing to settle down for, or even a home he's able to call his own.

Brody MacCafferty owns a bodyguard company which has a few perks. Being in Hawaii and picking up a handsome cowboy for a hot one-night stand is one of them. Brody doesn't expect to see the gorgeous man again.

Neither man can forget that night in Hawaii and fate steps in, connecting them together in ways deep and true. Can Brody convince Tony that Brody's arms are the very home Tony's been looking for?

Wishing for a Home

If their relationship is discovered, Derek's singing career would end, but Max can't live a lie. Who will risk it all for a chance at forever?

Derek St. Martin is Nashville's hottest country singer. For eight years, fame and fortune have come his way, but he's not happy. In fact, he's on the edge of a nervous breakdown or checking into a drug rehab centre. Hiding his sexual preference is driving him to resort to numbing the pain. When his stepbrother suggests he should go on vacation, Derek jumps at the chance to relax and get his head on straight.

Max Furlo isn't amused. His bosses were leaving him in charge of some singer while he had other more important things to take care of. Seeing Derek St. Martin for the first time hits Max hard and, suddenly, he's considering a summer fling.

Both men know that a relationship can never be for them. Derek's career wouldn't handle the news and Max can't live a lie. Yet when a summer fling becomes love, who will be willing to risk it all for a chance at forever?

Chaz struggles with his addiction, while continuing to do his job of saving bull riders, but it's all getting out of control.

Charles 'Chaz' O'Brien has been at the top of his profession for many years, enduring injuries that would have crushed a lesser man. Yet the top bullfighter isn't calling it quits any time soon. He does his job with a fierce joy, all the while he's hiding a terrible secret. One that could get him suspended, and could end up killing the very men he protects.

Peter Skinner loves working for Les Hardin and Randy Hersch. His bosses are amazing men, but seeing how in love they are every day makes Peter's heart ache. He wishes he could find a man to love him like that, but he knows they're hard to come by in Wyoming where he lives.

Until one day, Peter finds a man strung-out in an alley, and Peter is the only one around to deal with it. When Peter and Chaz meet, their worlds collide in a way that could be the best thing in the world for them both, or the worst experience of their lives.

Home is sweetest when it's the one person you can't live without.

Yancey MacCafferty and Juan Romanos fell in love when they were in their teens, but their families convinced them both to follow their dreams and explore the world before committing tothem in different directions. Yancey heads off to veterinarian school while Juan goes East to ride show horses. They stay in touch, and see each other as often as they can, but slowly they begin to drift apart.

Until Yancey graduates from college and decides it's time to claim Juan as his. He gets a job working at a clinic near where Juan trains and rides. They spend as much time together as their work allows, finding out that while they may still love each other, meshing their lives together will take a lot more work.