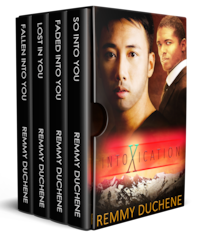 From Lust to Love in its purest form…

Alfred Leung’s life is in the crapper. From his gold-digging, racist mother and a cheating ex-boyfriend to his hang-ups about sex—everything in his existence depresses him. Add to it passing his days serving faux French food in a diner. It isn’t how he planned on spending the rest of his life, so the fates have definitely conspired against him. Just out of a relationship, he decides to focus on work and going back to one of the things that makes him happy—photography. Then, in his Armani suit, Darius Stark walks through the door of the diner, and Alfred’s world is about go into a tail spin he never saw coming.

Darius Stark hasn’t been with a man in years. Men see the suit and run screaming in the other direction or they tear-ass toward him because they see dollar signs. He decides to focus on his business, but soon he’s buried himself so deeply in his work that years goes by without someone to love. Finally, he sees Alfred and wants him, but Darius is about to find out not everyone thinks he’s almighty and that some men are flawed.

Ravinder Raja never saw himself as a jealous person, but when his best friend, Alfred, begins preparations to get married, Ravinder can’t help feeling alone. While kicking his best-man duties into high gear, he finds a job in India working as the PR rep for a wounded security company. He just wants to get away from all things ‘wedding’ until he has to face the music. He never expected Thaddeus Masterson and the way Ravinder’s body betrays him when it comes to the sexy ex-hacker.

When he was younger, Thaddeus Masterson got into some serious trouble. But now, reformed and fresh from working with the FBI, he’s decided to go back into business for himself—legally. When a friend’s company is brought to its knees by hackers, Thaddeus packs his stuff and jets off to India. It’s the last place he expects to find love. But, as they say, love always finds a way.

Lust is better together.

Although Jackson Stark wanted to get into dancing full time, he promised his father and Uncle Darius Stark that he would go to university first. After fast-tracking through his program while auditioning for small roles, he gets a job working at Darius’ video game company as a game designer. When Jackson gets the chance to be the face of a men’s line, he sees it as something else to add to his resume. Then he meets his boss, Ko, and everything he’s heard about love turns out to be true—it’s a giant pain in the ass.

Ko Takao never saw himself as a business mogul. After his father’s death, Ko inherits Hansamu, a clothing company that caters to the man who loves looking dashing. From handmade suits to loungewear, they are at the top of their game and Ko is looking to keep it that way by finding the perfect face to front the label. When Thaddeus suggests Jackson Stark, Ko can’t imagine it—then he lays eyes on the young stud again and all his reservations, along with his self-control, go right out of the window.

Lust is just the beginning…

Growing up, Mathias Jago’s life was not a walk in the park. All he knows comes from the streets, so it was no surprise he wound up taking his clothes off for a living. Mathias settles into his life of regret and twenty-dollar bills sliding into his underthings.

When Abhay Chetan walks into the Thornless Rose he takes Mathias’ breath away. But that is just a momentary lapse in judgment…right?

Abhay Chetan, tech guru, is all work and no play. Besides, the last time he’d gotten involved with anything to do with his sexuality, he’d been disowned. Love is not on his radar. Then his friends talk him into a night out at a gentleman’s club and he goes more to shut them up than anything else. As the night wears on, Abhay is bored out of his mind until ‘The Gentleman’ is announced and Abhay cannot keep his eyes off the stallion in the dark suit. When two days later he’s still thinking about ‘The Gentleman’, Abhay figures he can either do something about it or let it drive him crazy.