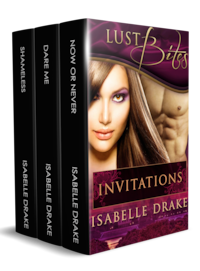 Dressed as a sex slave and hiding behind a mask, Emily arrives at a costume party ready to make a former co-worker pay for not noticing her lush curves.

Emily grabs the opportunity to make a former co-worker she fantasised about before leaving for the US Peace Corps pay for not noticing her lush curves. Her goal—blow his mind with her sex slave seduction and leave him aching for more.

Wearing a borrowed costume and mask, Daniel accepts the offer of a woman eager to show him what she can do with the sheer scarves she's untying from her waist. His goal—make sure the woman undressing for him knows how incredible she is and understands that he isn't a one-night-only kind of man.

A hotel bed, two pairs of handcuffs, coils of rope and a body builder with a naughty plan—can Kitty Maar handle it all?

Her outrageous tales of hooking up with the hottest guys in DC, attending parties at the most exclusive addresses, and joining in on spontaneous ménages at political fundraisers are the talk of Washington. So when she makes plans with Damian Markos, he's expecting a true sexual wildcat.

Damian's secret plan is to surprise Kitty with an evening so intense it will test even her sexual boundaries. It isn't easy coming up with something the city's most notorious man-hunter might not have already done, but he has connections that run deep in DC's inner circles.

Damian is determined to show Kitty that he's the only man she needs to satisfy her every need. Kitty is crazy about Damian, but will she be able to accept the sexual challenge he has planned for her?

Pretending to be a tourist from England while at an exclusive penthouse party, Jenn steps into a trap set by a hot cop with cool-green eyes.

Jenn Davidsen knows the only way to get a guy is to go out and look for one. But what’s a woman to do when she has nowhere to go? Get creative, that’s what.

When an invitation to an exclusive penthouse party comes across the fax machine at the boutique hotel where Jenn works, she takes it for herself even though the invitation is meant for a guest. Once there, she takes the advice of a friend—she pretends to be someone else. Her fake accent and made-up personality make her the centre of attention.

Liam Wallace doesn’t like to make the same mistake twice. So when an actress he once worked with—a woman who’s been at the centre of his sizzling daydreams for months—shows up at a party, he puts a plan in motion. This time he isn’t going to stop until her gets Jenn right where he wants her—in his arms and in his bed.