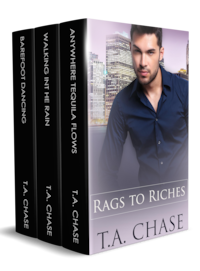 Sidney Richardson has watched his two best friends fall in love, leaving him to wonder if he’ll ever find the right man for him. Sure, he’s been playing the field since he discovered sex, but he’s never taken a chance on one of those one-night stands to see if there might be more. Now he’s ready, but is the man he’s waiting on ready as well?

Tito Perez has had a rough go of it, but he’s finally in a good place in his life. He’s got a great job and a group of marvellous friends. Who cares that he doesn’t have that one special guy in his life? Some people just aren’t meant to fall in love.

Then a chance meeting between boss and employee gives Sidney and Tito an opportunity to put their hopes and dreams into action. Will love flow as easily as the tequila Tito pours?

Walking in the Rain

Sometimes fate brings us the right person to make our world perfect.

Dayton VanHooren is a United States senator who doesn’t really like his job. He’s been too busy to date, much less pick anyone up for sex. Being openly gay means he doesn’t have to worry about scandal, but he’s looking for something more than a good time.

Mickey O’Leary can barely think, he’s so exhausted. Working three jobs to help pay his brother’s hospital bills keeps him going and helps him forget about how lonely he is. Mickey would like to meet a nice guy who won’t run at the first hint of Mickey’s problems.

A wedding reception and a thunderstorm are catalysts to bring these two men together. What can they do when they discover the perfect man for them but fall in love?

A moment in time can be the most pivotal one in our lives.

Kendall VanHooren is happy with his life. He works as a corporate lawyer in his father’s firm and does as he wishes on the weekends. He used to be a partier, but as he’s matured, he’s settled down and figured out that sometimes quiet is a good thing.

George Bowie is working a minimum wage job, which is barely keeping him off the streets most days. He lost his job in the banking crisis and has learned the hard way that pride has no place when it comes to survival.

Dancing barefoot on the beach might seem an odd thing to do, but it brings two men together at just the right moment for their worlds to collide.