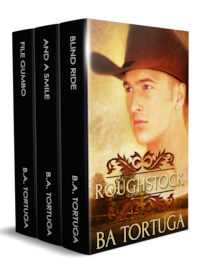 Roughstock: Part One: A Box Set

Jason Scott has everything a bull rider wants—success, money and traveling partner Andy Baxter. When he loses his sight in an accident, he stands to lose it all.

Jason Scott is at the top of the bull riding game, on his way to a winning season. Along with his traveling partner, Andy Baxter, he’s riding hard on the circuit, working around the country with all of the other bull riders and bullfighters, living the good life. The only thing he wishes he had is Bax, but he’s afraid to take the step that would make them more than friends, worried that it will ruin everything.

When a terrible accident leaves Jason unable to see, his whole life goes south. Jason decides to chuck it all, determined to go home and hide at his momma’s ranch. Bax has other ideas. He wants to make sure his best friend doesn’t give up, and he hatches a plan that stuns Jason and makes their friends and family think he’s crazy.

With the help of the other bull riders and a very persistent bull fighter named Coke, Bax convinces Jason to give life one more try. With Jason cautiously learning to hope, and his relationship with Bax going to the next level, life gets pretty complicated. Everyone gets in on the project, from Jason’s strong-willed mother to an entire ranch full of children, all of them working to help Jason do what he loves.

All Coke Pharris wants is for his cowboys to be safe—all of them. When rodeo clown, Dillon, sets to prove that there’s more to the bullfighter, people could get hurt.

It’s Coke Pharris’ job to save bull riders from bulls, and he takes his work very seriously. Which is why he’s devastated when one of his favorite riders gets hurt, and he’s determined to help the young man ride again. Dillon Walsh is the arena entertainer for the bull riding tour, and he wants to help. He also wants Coke, has been admiring the man for a long time. He hasn’t made a move on Coke for fear of messing up their friendship, but when he finds out Coke might feel the same way, Dillon has to try to win Coke over.

Coke thinks he’s too old for Dillon, too beat up and scarred, but he can’t resist when Dillon finally makes a play for him. Dillon is like a wet dream for Coke, and the two of them have a great time getting to know each other better, at least until the danger of their job threatens to come between them. Will Dillon and Coke be able to help their friend and weather the problems that blow their way?

Beau is riding like the two-time champ that he is, but nothing is assured in the world of bullriding—not happiness, not wealth, and not survival.

Beau is a two-time champion bullrider who is working on his third title. Sam is his long-time lover and traveling partner, who is feeling the sting of having just about the worst season he can remember.

The two of them are on the road together twenty-four-seven, and it’s starting to get to them a little, between the constant injuries Sam faces, and the relentless press that Beau has to put up with.

Add in friends on the circuit who need their help and the fact that they have to hide what they mean to each other, and it’s no wonder that Sam and Beau’s relationship is starting to wear a little from the friction.

When things blow up in their faces, Sam leaves the bullriding tour for a while, but the boys find out they’re far more miserable apart than they are together. Beau and Sam may agree to disagree in order to make peace and help out their friends Jason and Coke, but in the unpredictable world of extreme sports, nothing goes as it’s planned. Can Beau and Sam recover from what just might be the last ride of Sam’s life?