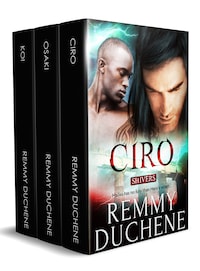 Ciro is the son of Zeus and the goddess of the Storm Winds. He must stop his crazy, cursed brothers from destroying Earth, but most importantly from destroying the man he loves.

Ciro Pyktis was born with a target on his back, thanks to his father Zeus’ infidelity. Tired of her husband’s man-whoring ways, Hera cursed his latest offspring born outside their marriage to become Shivers. Somehow, Ciro was born a good Shiver, but a few of his brothers are hellbent on destroying him and the humans.

Finally, Ciro finds the man of his dreams and he should be happy, but now, not only does he have to protect all of Earth and Olympus from his brothers, he must also keep Carter Olabasu safe from the evil Ciro knows is coming.

Carter Olabasu has everything—his brother finally accepts his homosexuality, Carter has a thriving architecture business and the freedom to do what he wants when he wants. But he’s lonely. A chance meeting at a nightclub brings him into Ciro’s path. Almost instantly, he’s obsessed by a need that he’s never felt before—one for Ciro. However, when the world starts falling apart around him, Carter will have to face the fact that his new man isn’t who Carter thinks he is, and there are things that go bump in the night humans can never, ever find out about.

Once a samurai, always a Shiver...

Kofi Olabasu needs a vacation. He’s spent so much time looking out for his brother and working that he’s completely neglected himself. To make matters worse, feelings for a man are driving him crazy. The moment Kofi feels Osaki, he knows something is about to change. Confused about his attraction to Osaki, he agrees to take a vacation and accepts Osaki’s offer of being Kofi’s tour guide in Japan. However, nothing is as it seems. Soon every dark corner is filled with danger and those who wish to do him harm.

Osaki has a lot on his plate and love is the last thing he has time for. Not only does he have to get used to his new powers as a Shiver and all the training it involves, but he also finds himself being drawn to a human—though Kofi makes it clear he’s into women—and Osaki must respect the man’s wishes. All Osaki really has to do is focus on training and being the best tour guide possible for Kofi. But nothing ever goes as planned and soon rogue Shivers are popping out of the woodwork, hell-bent on destroying Osaki for his inheritance. It soon becomes quite clear that they want him dead, and they’re not afraid to use Kofi as leverage—or as collateral damage.

When a Shiver’s fed up, no one’s safe.

Koi Pyktis is the last of the Shivers and, lately, he’s been feeling as if the whole world is in love, leaving him the odd Shiver out. Though he has his eyes on Kofi’s friend, Christophe Sidler, he knows he must keep his hands off him. His father’s enemies are out there and they seem hell-bent on starting a war between the Shivers and anyone else they want.

Christophe Sidler has loved Koi Pyktis since the moment he laid eyes on the studly Greek. But he’s fresh from mourning his mother, getting his feet wet in the business world and trying desperately not to put his foot in his mouth around Koi.