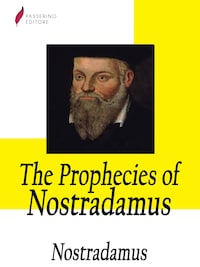 The Prophecies of Nostradamus

129 pages
TypeE-book
LanguageEnglish
Categories
Personal DevelopmentMindfulness
Share this book
Michel de Nostredame (depending on the source, 14 or 21 December 1503 – 1 or 2 July 1566), usually Latinised as Nostradamus, was a French astrologer, physician and reputed seer, who is best known for his book Les Prophéties, a collection of 942 poetic quatrains allegedly predicting future events. The book was first published in 1555 and has rarely been out of print since his death.

Nostradamus's family was originally Jewish, but had converted to Catholicism before he was born. He studied at the University of Avignon, but was forced to leave after just over a year when the university closed due to an outbreak of the plague. He worked as an apothecary for several years before entering the University of Montpellier, hoping to earn a doctorate, but was almost immediately expelled after his work as an apothecary (a manual trade forbidden by university statutes) was discovered. He first married in 1531, but his wife and two children died in 1534 during another plague outbreak. He fought alongside doctors against the plague before remarrying to Anne Ponsarde, who bore him six children. He wrote an almanac for 1550 and, as a result of its success, continued writing them for future years as he began working as an astrologer for various wealthy patrons. Catherine de' Medici became one of his foremost supporters. His Les Prophéties, published in 1555, relied heavily on historical and literary precedent, and initially received mixed reception. He suffered from severe gout toward the end of his life, which eventually developed into edema. He died on 2 July 1566. Many popular authors have retold apocryphal legends about his life.

In the years since the publication of his Les Prophéties, Nostradamus has attracted many supporters, who, along with much of the popular press, credit him with having accurately predicted many major world events. Most academic sources reject the notion that Nostradamus had any genuine supernatural prophetic abilities and maintain that the associations made between world events and Nostradamus's quatrains are the result of misinterpretations or mistranslations (sometimes deliberate). These academics argue that Nostradamus's predictions are characteristically vague, meaning they could be applied to virtually anything, and are useless for determining whether their author had any real prophetic powers. They also point out that English translations of his quatrains are almost always of extremely poor quality, based on later manuscripts, produced by authors with little knowledge of sixteenth-century French, and often deliberately mistranslated to make the prophecies fit whatever events the translator believed they were supposed to have predicted.