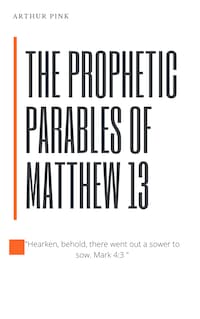 The Prophetic Parables of Matthew 13

114 pages
TypeE-book
LanguageEnglish
Categories
Non-fictionPhilosophy & Religion
Share this book
The Prophetic Parables of Matthew 13 is a message of meditation based on the Bible and written by Arthur Walkington Pink (1 April 1886 – 15 July 1952) was an English Bible teacher who sparked a renewed interest in the exposition of Calvinism or Reformed Theology. Little known in his own lifetime, Pink became "one of the most influential evangelical authors in the second half of the twentieth century."

Arthur Walkington Pink was born in Nottingham, England, to a corn merchant, a devout non-conformist of uncertain denomination, though probably a Congregationalist. Otherwise, almost nothing is known of Pink's childhood or education except that he had some ability and training in music.

As a young man, Pink joined the Theosophical Society and apparently rose to enough prominence within its ranks that Annie Besant, its head, offered to admit him to its leadership circle.[4] In 1908 he renounced Theosophy for evangelical Christianity.

Desiring to become a minister but unwilling to attend a liberal theological college in England, Pink very briefly studied at Moody Bible Institute in Chicago in 1910 before taking the pastorate of the Congregational church in Silverton, Colorado. In 1912 Pink left Silverton, probably for California, and then took a joint pastorate of churches in rural Burkesville and Albany, Kentucky. In 1916, he married Vera E. Russell (1893–1962), who had been reared in Bowling Green, Kentucky. Pink's next pastorate seems to have been in Scottsville. Then the newlyweds moved in 1917 to Spartanburg, South Carolina, where Pink became pastor of Northside Baptist Church.

By this time Pink had become acquainted with prominent dispensationalist Fundamentalists, such as Harry Ironside and Arno C. Gaebelein, and his first two books, published in 1917 and 1918, were in agreement with that theological position.

Yet Pink's views were changing, and during these years he also wrote the first edition of The Sovereignty of God (1918), which argued that God did not love sinners and had deliberately created "unto damnation" those who would not accept Christ. Whether because of his Calvinistic views, his nearly incredible studiousness, his weakened health, or his lack of sociability, Pink left Spartanburg in 1919 believing that God would "have me give myself to writing." But Pink then seems next to have taught the Bible with some success in California for a tent evangelist named Thompson while continuing his intense study of Puritan writings.