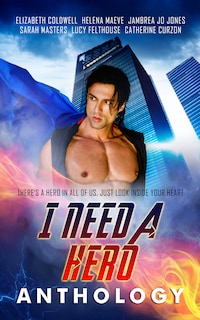 I Need a Hero

'Behind The Mask' by Elizabeth Coldwell

He keeps his true identity hidden, even from the man he loves…

Twenty years ago, superheroes were outlawed by the mayor of Mokum City. Christopher Chase has grown up knowing that he has all the strength and speed of Sprint, his superhero father, who died attempting to save the mayor’s niece from being kidnapped. But, unlike his father, he is unable to fulfil his destiny and become a masked crimefighter. Even Christopher’s boyfriend, bar owner Jimmy Brennan, doesn’t know Christopher’s true identity.

A chance encounter with a purse snatcher in the city cemetery gives Christopher a taste of what it’s like to use his powers for good. And when Jimmy becomes caught up in a hostage situation, Christopher can no longer stand by. Even if it means losing his own life, he must pull on the costume of Sprint to save the man he loves.

Sometimes, all that matters is being in the right place at the right time.

Rami knows the storm should have killed him. Very much alive, though slightly waterlogged, he can’t shake the feeling that he didn’t survive on his own merits. He had help.

When a person of interest in the legal matter he’s been hired to untangle reveals a strong resemblance to the man who may have saved his life, venturing into uncharted waters becomes the least of Rami’s problems.

A loner living in the shadow of a once-great house, Malcolm is a hard man to pin down. His seemingly impossible feats of heroism have certainly saved lives, but the people of Envern, Maine, are only too eager to allege he had something to do with his employer’s death. Leading a secretive existence under a cloud of suspicion should scupper Malcolm’s appeal, but Rami has secrets of his own and his relationship with danger has always been complicated.