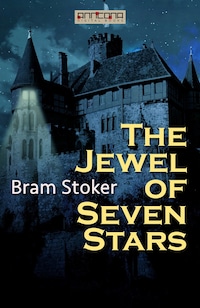 The Jewel of Seven Stars

The Jewel of Seven Stars is a horror novel by Bram Stoker first published in 1903.

The story is a first-person narrative of a young man pulled into an archaeologist's plot to revive Queen Tera, an ancient Egyptian mummy.

The Jewel of Seven Stars is part of a subgenre of Gothic fiction known as Gothic horror. First featured in Horace Walpole's The Castle of Otranto, Gothic horror combines elements of the Gothic and Romantic genres to create a pleasurably terrifying experience. Frankenstein, The Strange Case of Dr. Jekyll and Mr. Hyde, and Stoker’s Dracula are all considered landmarks of Gothic horror fiction.

The Jewel of Seven Stars was Bram Stoker's eighth novel. This novel, along with The Lair of The White Worm, is one of his most famous after Dracula. The story has been adapted to film several times.

The Jewel of Seven Stars was first published in the UK in 1903 and in the US in 1904. This is the 1912 edition that was published in an abridged version in the UK in 1912 by William Rider & Son, London. The publishers felt that the original ending of the book was too disturbing and asked Stoker to rewrite it. As a result, Chapter XVI ”Powers - Old and New” was removed and the book was given a happier ending. ”Powers - Old and New” was published as an excerpt under the name ”The Bridal of Death” and in 1990 it appeared in the short story collection Midnight Tales, Peter Owen Publishers, London.

Although the abridged version was never published in the US, it was reprinted several times in the UK. The original version of this novel was not available in the UK until it was republished in 1996.