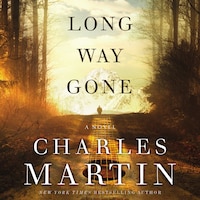 From New York Times bestselling author Charles Martin comes a radical retelling of the prodigal son story. Cooper O'Connor thought he could make it big as a musician, but he promptly lost it all. Can he repair his relationship with the father who never stopped calling him home?

At the age of eighteen, musician and songwriter Cooper O’Connor took everything his father held dear and drove 1,200 miles from home to Nashville, his life riding on a six-string guitar and the bold wager that he had talent. But his wager soon proved foolish.

Five years after losing everything, he falls in love with Daley Cross, an angelic voice in need of a song. But just as he realizes his love for Daley, Cooper faces a tragedy that threatens his life as well as his career. With nowhere else to go, he returns home to the remote Colorado mountains, searching for answers about his father and his faith.

When Daley shows up on his street corner twenty years later, he wonders if it’s too late to tell her the truth about his past—and if he is ready to face it himself.

“Cooper and Daley's story will make you believe that even broken instruments have songs to offer when they're in the right hands. Charles Martin never fails to ask and answer the questions that linger deep within all of us. In this beautifully told story of a prodigal coming home, readers will find the broken and mended pieces of their own hearts.”—Lisa Wingate, New York Times bestselling author of Before We Were Yours

Stand-alone novelUSA TODAY bestseller and Christy Award Book of the Year 2017Also by Charles Martin: The Letter Keeper, The Mountain Between Us, Send Down the Rain, and When Crickets Cry