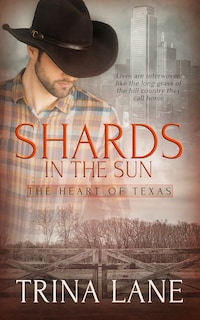 Shards in the Sun

The heart of Texas beats strong, fueled by the love between two men whose lives are interwoven like the long grass of the hill country they call home.

Brandon Blackstun has spent the last decade moving on from the hellish halls of high school. With an invitation to his reunion in hand, he plans to show his former classmates that not only did the repeated occurrences of being slammed into lockers not cause brain damage, but he’s now a successful cover artist for the very books they buy off the shelves.

Tyler Synder was determined not to follow in his father’s footsteps as head of the international corporation that bears the family name. Instead, his heart is tied to the beat of his horses’ thundering hooves. He operates a breeding program for Tennessee Walkers and a guest ranch a couple of hours from the urban luxury of Dallas where he was raised.

The two men might live very different lives, but the heat between them is hotter than any Texas sun. With the help—or meddling—of an unlikely pair of friends, the two explore a relationship that stirs something deep inside them. Distance and misunderstandings force Tyler and Brandon to consider whether the fulfillment they’ve experienced in each other’s arms is worth the sacrifice of the lives they’ve built individually.

Texas may be the second biggest state in the union, but is it large enough to embrace the love between these two men, or will their deeply hidden fears shatter the boundaries of their hearts?