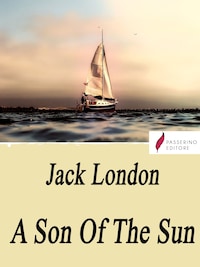 A Son of the Sun

177 pages
AuthorJack London
TypeE-book
Categories
NovelsNovels
Share this book
A Son of the Sun is a 1912 novel by Jack London. It is set in the South Pacific at the beginning of the 20th century and consists of eight separate stories. David Grief is a forty-year-old English adventurer who came to the South seas years ago and became rich. As a businessman he owns offices in Sydney, but he is rarely there. Since his wealth spreads over a lot of islands, Grief has some adventures while going among these islands. London depicts the striking panorama of the South seas with adventurers, scoundrels, swindlers, pirates, and cannibals.

John Griffith London (born John Griffith Chaney; January 12, 1876 – November 22, 1916) was an American novelist, journalist, and social activist. A pioneer of commercial fiction and American magazines, he was one of the first American authors to become an international celebrity and earn a large fortune from writing. He was also an innovator in the genre that would later become known as science fiction. His most famous works include The Call of the Wild and White Fang, both set in the Klondike Gold Rush, as well as the short stories ”To Build a Fire”, ”An Odyssey of the North”, and ”Love of Life”. He also wrote about the South Pacific in stories such as ”The Pearls of Parlay”, and ”The Heathen”. London was part of the radical literary group ”The Crowd” in San Francisco and a passionate advocate of unionization, workers' rights, socialism, and eugenics. He wrote several works dealing with these topics, such as his dystopian novel The Iron Heel, his non-fiction exposé The People of the Abyss, War of the Classes, and Before Adam.