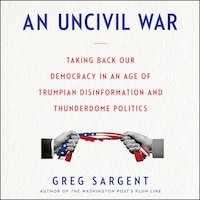 The author of the Washington Post’s hugely influential ”Plum Line” sounds the alarm on the subversion of our democracy by self-interested politicians, greedy plutocrats, foreign government hacking, racial prejudice, media propaganda and our own lack of vigilance, and what must be done to save it before it’s too late.

The sophistication and ambition of those now eroding American democracy by gaming the rules in their favor is unprecedented, including computer-generated gerrymandering, unreasonable voter ID laws, limitations on voting hours, a lack of convenient polling places, and efforts to disenfranchise likely Democratic voters. This has been accompanied by foreign government intervention and an unprecedented level of political disinformation that threatens to undermine the very possibility of shared agreement on facts and poses profound new challenges to the media’s ability to inform the citizenry.

Yet it would be wrong to think that the problem is that Republicans alone have learned how to work the system—our electoral process is undermining itself from within: its dysfunctional rules incentivize vicious partisan efforts to tilt the playing field, combining in a toxic escalation of polarization and a frightening corrosion of basic norms that threaten to totally eradicate fair play in politics.

In An Uncivil War, Washington Post journalist Greg Sargent vividly lifts the curtain on the nightmare dynamic that is transforming American politics into little more than a naked power struggle. Yet An Uncivil War is not only a thorough dissection of an ultimately immoral system, but a handbook for turning that around by restoring authentic democracy. Given the incredibly high stakes in 2018 and 2020, Sargent’s book could not be more essential.