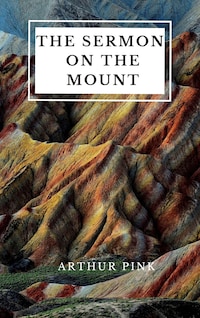 The Sermon on the Mount

654 pages
AuthorArthur Pink
TypeE-book
Categories
Personal DevelopmentReligion & PhilosophyNon-fictionReligion & Philosophy
Share this book
A careful study of the four Gospels reveals the fact that Christ's ministry had, first, a special application to the afflicted people of God; second, it evidently had a peculiar reference to His own immediate disciples; and third, it had a general bearing upon the people at large. Such we take it was also the case with the Sermon on the Mount, embodying and illustrating these three distinctive features of Christ's public ministry.

First, its opening section (the ”Beatitudes”) is most evidently addressed to those who were afflicted in their souls-those deeply exercised before God. Second, its next division referred directly to His public servants, as will be shown (D.V.), when we take it up in detail. Third, its larger part was a most searching exposition of the spirituality of the Law and the refutation of the false teachings of the elders, and was meant mainly for the people at large.

We do not think that W. Perkins went too far when he said of the Sermon on the Mount, ”It may justly be called the key of the whole Bible, for here Christ opens the sum of the Old and New Testaments.” It is the longest discourse of our Lord's recorded in the Scriptures. He began His public ministry by insisting upon repentance (Matthew 4:17), and here He enlarges upon this vitally important subject in a variety of ways, showing us what repentance really is and what are its fruits. It is an intensely practical sermon throughout: as Matthew Henry tersely expressed it, ”There is not much of the credenta of

Christianity in it-the things to be believed; but it is wholly taken up with the agenda-the things to be done, for 'if any man will do His will, he shall know of the doctrine' (John 7:17).”

Though we are told at the beginning of chapter 5 that it was His ”disciples” whom Christ here taught, yet it is equally clear from the closing verses of chapter 7 that this Sermon was spoken in the hearing of the multitudes. This must be steadily borne in mind throughout, for while it contains much instruction for believers in connection with their living a good, honest, and blessed life, yet not a little in it is evidently designed for unbelievers, particularly those sections which contain a most searching setting forth of the spiritual nature of His kingdom and the character of those who enter and enjoy its privileges.

Romish teachers have greatly erred, for they insist that Christ here propounded a new Law-far more perfect than the law of Moses-and that He delivered now entirely new counsel to His disciples, which was never given in the Law or the Prophets; whereas His intention was to clear the true meaning of the Law and the Prophets. which had been greatly corrupted by the Jewish doctors. But we will not further anticipate what we shall (D.V.) contemplate more fully in the studies to follow.