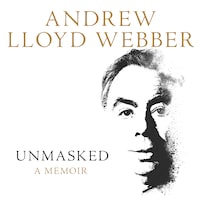 “You have the luck of Croesus on stilts (as my Auntie Vi would have said) if you’ve had the sort of career, ups and downs, warts and all that I have in that wondrous little corner of show business called musical theatre.”

The son of a music professor and a piano teacher, Lloyd Webber reveals his artistic influences, from his idols Rodgers and Hammerstein and the perfection of South Pacific’s ‘Some Enchanted Evening,’ to the pop and rock music of the 1960s and Puccini’s Tosca, to P. G. Wodehouse and T. S. Eliot. Lloyd Webber recalls his bohemian London youth, reminiscing about the happiest place of his childhood, his homemade Harrington Pavilion—a make-believe world of musical theatre in which he created his earliest entertainments.

Lloyd Webber shares his recollections of the works that have become cultural touchstones for generations of fans: writings songs for a school production that would become his first hit, Joseph and the Amazing Technicolor Dreamcoat; finding the coterie of performers for his classic rock opera Jesus Christ Superstar; developing his first mega-hit, Evita, which would win seven Tonys Awards, including Best Musical; staking his reputation and fortune on the groundbreaking Cats; and making history with the dazzling The Phantom of the Opera.