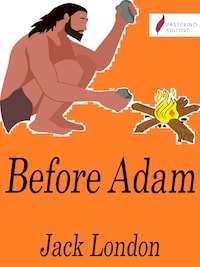 123 pages
AuthorJack London
TypeE-book
Categories
NovelsNovels
Share this book
Before Adam is a novel by Jack London, serialized in 1906 and 1907 in Everybody's Magazine. It is the story of a man who dreams he lives the life of an early hominid. The story offers an early view of human evolution. The majority of the story is told through the eyes of the man's hominid alter ego, one of the Cave People. In addition to the Cave People, there are the more advanced Fire People, and the more animal-like Tree People. Other characters include the hominid's father, a love interest, and Red-Eye, a fierce ”atavism” that perpetually terrorizes the Cave People. A sabre-cat also plays a role in the story. Later scholars have noted strong eugenic themes in Before Adam.

”These are our ancestors, and their history is our history. Remember
that as surely as we one day swung down out of the trees and walked
upright, just as surely, on a far earlier day, did we crawl up out of
the sea and achieve our first adventure on land.”

John Griffith London (born John Griffith Chaney; January 12, 1876 – November 22, 1916) was an American novelist, journalist, and social activist. A pioneer of commercial fiction and American magazines, he was one of the first American authors to become an international celebrity and earn a large fortune from writing. He was also an innovator in the genre that would later become known as science fiction.
His most famous works include The Call of the Wild and White Fang, both set in the Klondike Gold Rush, as well as the short stories ”To Build a Fire”, ”An Odyssey of the North”, and ”Love of Life”. He also wrote about the South Pacific in stories such as ”The Pearls of Parlay”, and ”The Heathen”. London was part of the radical literary group ”The Crowd” in San Francisco and a passionate advocate of unionization, workers' rights, socialism, and eugenics. He wrote several works dealing with these topics, such as his dystopian novel The Iron Heel, his non-fiction exposé The People of the Abyss, War of the Classes, and Before Adam.