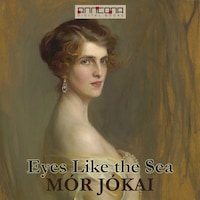 He was a painter, a poet, a novelist. He lived during the Hungarian revolution and his love of freedom meant his life was often in peril. She was his first love, this girl with the eyes like the sea. She was at heart noble, good and loving.

What an excellent lady might have been made out of this woman, if she had only met with a husband who, in the most ordinary acceptance of the word, had been a good fellow, as is really the case with about nine men out of every ten. But she always managed to draw the unlucky tenth out of the urn of destiny.

And so she spurned his true love in favor of a high-flying dandy. He went on to pursue a life of politics and she to follow her capricious heart. But yet, throughout her life, she kept returning to him and to the end, of all men, she loved him perhaps best of all.

Mór Jókai (1825-1904), outside Hungary also known as Maurus Jokai, was a Hungarian dramatist and novelist. Jókai was a romantic with an imagination and humour that has proved timeless. Imagine a combination of Walter Scott, William Beckford, Alexandre Dumas (père), and Charles Dickens, together with a strong hint of Hungarian touch, one can get an idea of the character of his work.