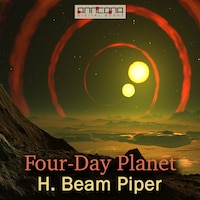 Dangerous beasts, impossible weather, and political intrigue on the planet Fenris, a backwater planet with days that last a quarter of a year.

Fenris isn't a hell planet, but it's nobody's bargain. With 2,000-hour days and an 8,000-hour year, it alternates blazing heat with killing cold. A planet like that tends to breed a special kind of person: tough enough to stay alive and smart enough to make the best of it. When that kind of person discovers he's being cheated of wealth he's risked his life for, that kind of planet is ripe for revolution.

- The planet Fenris rotates four times per the Terran standard and each of the four days has one thousand hours of sunlight.

- The chief export is a tallow wax extracted from sea monsters that roam the waters. This is not just any wax. It has special properties and is sought for, all over the universe.

- There are rumors that the price per unit of tallow will go down, and that has the Monster Hunters on edge.

- A newspaper man, his father (the editor) and others try to expose what appears to be price fixing by the companies buying the wax.

All is not well on Fenris and will get worse on that, Four-Day Planet.