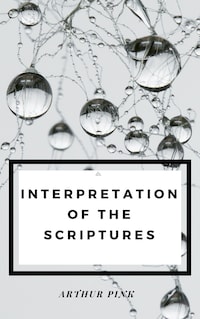 Interpretation of the Scriptures

233 pages
AuthorArthur Pink
TypeE-book
Categories
Personal DevelopmentReligion & PhilosophyNon-fictionReligion & Philosophy
Share this book
Man is notoriously a creature of extremes, and nowhere is that fact more evident than in the attitude taken by different ones to this subject. According some have affirmed the Bible is written in such simple language that it calls for no explaining, a far greater number have suffered the papists to persuade them that its contents are so far above the grasp of the natural intellect, its subjects so profound and exalted , its language so abstruse and ambiguous that the common man is quite incapable of understanding it by his own efforts, and therefore that it is the part of wisdom for him to submit his judgment to ”holy mother church,” who brazenly claims to be the only Divinely authorized and qualified interpreter of God's oracles.

Thus does the Papacy withhold God's Word from the laity, and impose her own dogmas and superstitions upon them. For the most part the laity are quite content to have it so, for therefore they are relieved of searching the Scriptures for themselves. Nor is it much better with many Protestants, for in most cases they are too indolent to study the Bible for themselves, and believe only what they hear from the pulpits.

The main passage appealed to by Romanists in an attempt to bolster up their pernicious contention that the Bible is a dangerous bookbecause of its alleged obscurityto place in the hands of the common people is Peter 3:15, 16.

Therein the Holy Spirit has told us that the apostle Paul, according to the wisdom given him, spoke in his epistles of ”some things hard to be understood, which they are unlearned and unstable wrest, as they do also the other scriptures, to their own destruction. ” But as Calvin long ago pointed out, ”We are not forbidden to read Paul's epistles because they contain some things difficult to be understood, but that, on the contrary, they are commended to us, providing we have a calm and teachable mind.”

It is also to be noted that this verse says ”some things” and not ”many,” and that they are ”hard” and not ”incapable of being understood”! Moreover, the obscurity is not in them, but in the depravity of our nature which resists the holy requirements of God, and the pride of our hearts which disdains seeking enlightenment from Him.

The ”unlearned” here refers not to illiteracy, but to being untaught of God; and the ”unstable” are those with no settled convictions, who, like weathervanes, turn according to whatever wind of doctrine blows upon them.

This important book by Arthur Pink tells us about the importance of interpreting the scriptures and leads us to meditate on the Word of God.

A text based entirely on the Holy Bible.