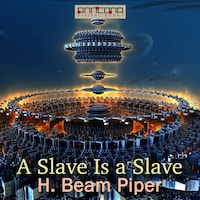 A Slave Is a Slave

A Slave Is a Slave is a science fiction novella written by H. Beam Piper, originally published in 1962.

There has always been strong sympathy for the poor, meek, downtrodden slave--the kindly little man, oppressed by cruel and overbearing masters.

Could it possibly have been misplaced...?

The Galactic Empire is slowly 'welcoming' into the family of civilized worlds those systems so far off in the backwater of the galaxy that they have been overlooked and ignored for the past 500 years or so. This is purely routine work because every planet offered the chance has eagerly accepted the invitation. Mainly because the enlightened Empire lets the planetary government continue to rule and do whatever it wants... with a few minor restrictions of course; and because the they are shown what happens to planets who decide not to accept the invitation.

Aditya is the system in question here. Forgotten for almost a millennium but surviving, thank you very much, with an economy based entirely on slavery. Everyone is a slave except for the few thousand Lords Master. What happens when the this type of society meets the Constitution of the Galactic Empire which forbids any type of slavery? What happens when the poor, oppressed slaves are given their freedom? Funny you should ask...

A Slave is a Slave first appeared in Analog, April 1962.