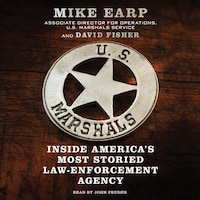 Blending history and memoir, retired U.S. Marshal Mike Earp—a descendant of the legendary lawman Wyatt Earp—offers an exclusive and fascinating behind-the-scenes look at the most storied law enforcement agency in America, illuminating its vital role in the nation’s development for more than two hundred years.

Mike Earp spent his career with the U.S. Marshals Service, reaching the number three position in the organization’s hierarchy before he retired. In this fascinating, eye-opening book, written with the service’s full cooperation, he shares his experiences and takes us on a fascinating tour of this extraordinary organization—the oldest, the most effective, and the most dangerous branch of American law enforcement, and the least known.

Unlike their counterparts in the police and the FBI, U.S. Marshals aren’t responsible for investigating or prosecuting crimes. They pursue and arrest the most dangerous criminal offenders on U.S. soil, an extraordinarily hazardous job often involving gun battles and physical altercations. Earp takes us back to the service’s early days, explaining its creation and its role in the border wars that helped make continental expansion possible. He brings to life the gunslingers and gunfights that have made the Marshals legend, and explores the service’s role today integrating federal, state, and local law enforcement agencies in the hunt for the most notorious criminals—terrorists, drug lords, gun runners.

Setting his own experiences within the long history of the U.S. Marshals service, Earp offers a moving and illuminating tribute to the brave marshals who have dedicated their lives to keeping the nation safe.