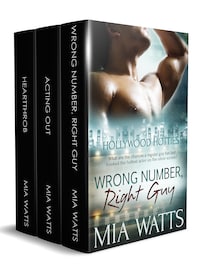 A wrong number with a sexy voice on the other end… What are the chances a regular guy has just hooked the hottest actor on the silver screen?

Ryan Pierce is in town shooting the latest romantic action movie and attending all the right publicity parties. He wasn’t expecting to pick up the phone to an easy laugh and real conversation. So, when he discovers that his caller has misdialed, it surprises him even more that he doesn’t want the man to hang up.

Dar Phillips is the last man to get star-struck, yet his best friend drags him out to be an extra on a movie set. It’s a chance to meet the guy on the set who he accidently called, but he has to admit the lead actor is hot stuff. Could the loping mega-star be his phone-a-friend? And, when they kiss, is Dar ready for the paparazzi and accusations of betrayal by the man who now stars in Dar’s every dream?

Who did Dar fall for? The elusive Ryan Pierce, who can’t be seen with him, or the quiet, gentle man who’s just a phone call away?

Who wouldn’t want Hollywood hottie Cree Radek? When Evan Walker, Cree’s assistant, gives in to temptation, he’s sure Cree only wants a one-nighter. Evan has plans of his own, and falling in love isn’t one of them.

Cree Radek is one of Hollywood’s hottest stars. He’s an unapproachable alpha wrapped in black leather and spikes with ice-blue eyes lined in black. He’s hard to read and all kinds of sex-on-a-stick.

Evan Walker works for Cree as his assistant. Long hours and living arrangements make it impossible to keep things professional. So, when things get steamy, Evan sees himself as an easy target. But for Cree, Evan is a lot more than a one-night stand.

Brett Shackley came to Hollywood for a taste of the fast life and hot, famous men. He never expected to find love behind the scenes.

Brett Shackley has watched his best friend find love with a famous actor. His connections have also given him the opportunity to work as a personal assistant to another Who’s Who in Hollywood. He’s a bit flamboyant and perhaps a tad too giddy when he settles on a new celebrity crush. So blinded by the brilliance of the bright lights headliner, he fails to see what’s right before his eyes.

Brett follows his boss to yet another movie set, preparing to scope out the new faces on the latest project. Sadly, it also means he’s sidelined with all the other assistants and behind the camera crew. Brett doesn’t mind too much as long as a certain actor gets a shirtless scene—and soon!

Eddie Huff has been around a couple of years. He knows a thing or two about playing it cool. The fact that Brett, a fellow personal assistant to the stars, is going gaga over Eddie’s A-list boss annoys him. Now he has to stay in close proximity with Brett. He gets to hear each longing sigh and flattering gush of superlatives—every single day. It’s enough to drive a guy insane.

What’s worse is that Eddie begins to suspect he might be just a teeny bit jealous that Brett’s single-minded attention is wasted on a star who couldn’t care less about anyone except himself.

Eddie thinks Brett might be the man for him. Now he has to convince the starry-eyed novice that the right heartthrob for the part isn’t the guy in front of the camera.

Family business takes Evan away in the middle of filming. Cree says he wants him back, but can a celebrity be faithful to a regular guy?