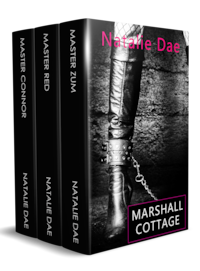 Pain of the pleasurable variety was all I needed—and Master Zum provided it.

I visited Marshall Cottage for one thing only—to be pleasured by Master Zum and the exquisite pain he offered. Actually, that was a lie. I visited to see him, to be touched by him in ways that told me he wasn’t just there for sex. Love, that’s what I wanted from him, to go along with the adoration I was so willing to shower on him. He was alluring, commanding, and I tingled all over every time he was near. I needed him, longed for him, and our time together was never a disappointment.

Nipple clamps, they were the order of the night—among other things. Could I handle them? Could I reach that sweet place I wanted to be in while he administered his brand of pain?

It had been hard to adjust to Master Red as he was known, who lavished praise and endearments on me as easily as scattering confetti. They sailed down, covering me, filling me with awe, and at first I’d wondered whether that was just his way. But something told me I meant far more to him than I’d imagined.

I needed the pleasure-pain he could give me—and if I were honest, love too. I couldn’t live without it. Or him. So when he took me into the voyeur room and made it clear he intended for us to put on a public show, I was excited that we were going to the next level. There were so many more levels after that and I wanted to experience them. I was ready for whatever he had to give.

And I intended to enjoy taking.

I needed a Master to satisfy my cravings. Would Mr M find the perfect man for me?

Master Connor was everything I’d ever wanted. How could I only visit him once a week without getting heavily involved? The truth was, I couldn’t. He was my dream Master and I aimed to be his dream sub. The thing was, I knew I’d fall in love with him, given half the chance. How could I not? He was charming, a good-looking man any woman would want as their own—and I quickly realised I wanted to make sure no other woman would have him. Did I have the courage to believe his words, though? He seemed sincere…

There was only one way to find out. Let myself agree to love him and see where the future took us. Otherwise, all he’d be was a one-night stand…