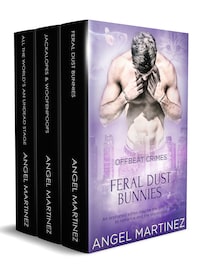 An orphaned kitten may be the only witness to romance and the impossible.

Officer Alex Wolf responds to a lot of ‘paranormal’ calls that aren’t. Exotic pet birds aren’t monsters and unusual dog breeds aren’t aliens. It’s a good thing he likes the Animal Control officers, but he both yearns for and dreads those calls where he runs into ACO Jason Shen. Jason’s scent is so delicious that Wolf has a difficult time humaning around him.

Animal Control calls take a disturbing turn, though, when Wolf and his lizard-man partner, Krisk, discover the impossibly mummified bodies of rats and an unfortunate mother cat. The rescue of the cat’s sole surviving kitten not only gives Wolf more time with Jason, which is both perplexing and wonderful, but also leads to dangerous discoveries. Something inconceivable stalks the city and its officers of the law. Wolf has to figure out what it is before it can attack and drain the life from the people and the kitten he loves.

Hoax animals and a consulting vampire on the prowl—ACO Jason Shen never thought having a cop boyfriend would be this hard.

All Animal Control Officer Jason Shen ever wanted was a quiet life of rescuing lost kittens and helping animals in need. Having a paranormal cop boyfriend guarantees an end to the quiet part. What at first seems like a random encounter with jackalopes in the park might be more than chance and when State Paranormal sends a handsome, charming vampire to consult with the Seventy-Seventh, he finds his relationship with Alex on shaky ground.

Officer Alex Wolf hoped his humaning skills were improving but now he can’t unravel the strange politics at State Paranormal or why Jason’s family seems to hate him. There’s no time to puzzle things out, either. Bizarre animals are loose in the city, Jason’s acting strange—and is the vampire captain from State flirting with him? Wolf’s going to have to keep his head in the game if he’s going to have any chance of putting the pieces together and keeping the city safe from the strange critters terrorizing its streets.

All the World's an Undead Stage

Carrington Loveless III, skim-blood vampire and senior officer of Philly’s paranormal police department, has long suspected that someone’s targeting his squad. The increasingly bizarre and dangerous entities invading their city can’t be a coincidence. So when a walking corpse spouting Oscar Wilde attacks one of his officers, Carrington’s determined to uncover the evil mind behind it all.

As a rare books librarian, Erasmus Graham thought he understood some of the stranger things in life. Sharing a life with Carrington has shown him he didn’t know the half of it. They’ve survived attack books and deadly dust bunnies together and got through mostly unscathed. Now his world and his vampire’s appear ready to collide again. Books are missing from the Rare Book collection—old tomes of magic containing dangerous summonings and necromancy. He’s certain whoever has been stalking the Seventy-Seventh is composing their end game. It’s going to take a consolidated effort from paranormal police, librarians and some not-quite-authorized civilians to head off the impending catastrophe.