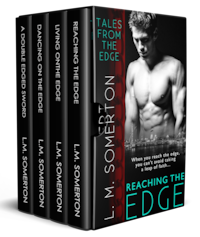 Tales from The Edge: Part One Box Set

The Tales from The Edge series: Part One

When you reach the edge, you can't avoid taking a leap of faith.

A social call to The Underground, a club owned by an old friend, turns into much more when Joe is introduced to a prospective sub. Falling hard for the boy's tumbling blonde curls, huge blue eyes and desperate need for protection, Joe carefully coaxes him out of his shell. By the end of an intense weekend, unbreakable bonds have been forged and Joe is well on the way to becoming Olly's Master.

Joe knows that there is trauma in Olly's past, but it is not until his professional and private lives collide that Joe discovers the truth. He knows he shouldn't have let Olly out of his sight but it's too late—Olly's old Master is back on the scene and he's not in the mood to forgive and forget.

With Olly's life on the line, Joe risks everything to save him. Has Joe found his perfect submissive only to lose him in a horrible twist of fate, or will love win the day? They've reached the edge and there's no avoiding a leap of faith.

Living on the Edge

Sometimes it takes willpower to resist temptation but courage to give in.

Aiden Keller is a brilliant and intriguing young man. When he's convicted of hacking, his sentence takes him to The Edge, a high-end corporate training company with a mysterious sideline. There he is given into the custody of its owner, the enigmatic and demanding Heath Anders, and his business partner Joe Dexter.

From the moment Heath takes charge of Aiden he recognises the boy's submissive nature, even though it is well hidden beneath a veneer of snarky attitude. But for twelve months, Aiden will be his responsibility and Heath cannot allow himself to get involved whilst the boy is obliged to obey him.

Aiden settles into his new life with the help of Olly, Joe's pretty, submissive boyfriend, who is very perceptive when it comes to noticing the sparks of attraction flying between Aiden and Heath. Slowly and gently, he teaches Aiden that submission is not a weakness and to accept his desire to be dominated.

Unable to resist, Heath starts to test Aiden's willingness to be obedient, and against all the odds, love (and lust) start to bloom. Aiden, however, is not quite what he seems and his past is about to endanger all their lives.

Dancing on the Edge

Life is a dance. Whether you lead or follow, the passion of it should sweep you away.

Carey and Alistair have the kind of relationship that is the envy of their friends. Carey is an old-fashioned Dom who appreciates quiet obedience. Alistair is a sub who is comfortable in his skin and finds peace in his submission. Needless to say, their happiness is too good to last.

When Alistair's powerful father chooses his reputation over his son, all hell is let loose. Forcibly committed to a clinic for reversion therapy, Alistair can only hope that his lover will save him.

Carey calls on his friends from The Edge and they band together not just to rescue Alistair but also to protect his future. They've all flirted with danger in the past—but friendship is worth any risk. As the tension mounts and the stakes get higher, new bonds are forged but will Carey and Alistair's love survive?

How do you stay standing when the ground is torn from beneath your feet?

Becket and Christian are taking the first, tentative steps towards the committed D/s relationship they both crave when the world literally explodes around them. In a frightening reversal of roles, Becket has to deal with his own vulnerability and Christian must find the strength to take care of his Dom. With the help of their friends at The Edge, the two men come to realise that dominance and submission cannot be switched on and off.

Events that could have ended in tragedy provide the catalyst that affirms their trust in each other, but there are still questions to answer. Is the safe path always the right one to take? Is control simply a state of mind?

One thing’s for certain, life’s too short for compromise.