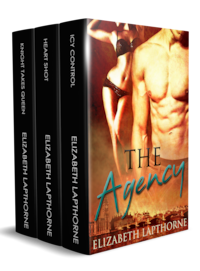 Rob and Sally need to uncover an ancient secret. But he’s losing control—and loving it.

Robert Stevens has known Sally Langtry for almost his whole life. They’ve been friends forever, and he’s always secretly loved her. Sally, an artist, is so sweet he can’t possibly be the right man for her. She’s free-spirited, innocent and optimistic. Rob has always resisted bringing the darkness of his job, the horridness of what he sees day in and day out, into her life.

He is urged by his colleague, El, and his boss to turn to Sally for help in looking for a stolen Cezanne masterpiece. At a loose end and unsure where else to turn, he does so. El and her lover James recover the painting, but Sally’s curiosity is now piqued. She wants to tag along to study the work of art. Rob, always helpless when it comes to indulging her, agrees. Sally helps discover a series of codes hidden within the picture.

The action becomes deadly, but it’s too late for them to turn back. Rob tries to protect Sally, but he no longer has the legendary control he’s so used to working with.

Emily is a cautious assassin. While researching a target as a favor for a friend it all goes wrong, and she bumps into Finlay Mann—an Agent. A deep conspiracy has them only able to trust each other and risk their most venerable targets—their hearts.

Emily is an assassin—but one with a difference. She insists on checking out her targets herself, refusing to take a mission from her government contact—James—until she’s satisfied the person truly does deserve to die. She’s doing such research on a highly placed government man—a friend of the PM—when all hell breaks loose. The café Keyton Marshall is in is shot up, and Emily finds herself under attack.

Finlay Mann is with the Agency. He’s tagging along, playing bodyguard when what was supposed to be a simple, time-filling, routine job goes seriously south. After making certain his client is safely away, he’s drawn in by Emily. Together, they’re trying to piece a complex puzzle and discover who is being lied to, betrayed, and possibly with traitorous results.

Unsure whom either can trust, it’s the passion that flares between them that finally reassures them both they’re on the same side, albeit from different perspectives. Emily is ensnared by Fin’s loyalty and compassion, and Fin finds himself desperate to protect and support this fierce, hard woman who for too long has been able to rely on no one but herself. They both know the fatality of a heart shot, but each is helpless to resist the other.

Peter is at a loose end. Bored, he drops in to tease fellow Agent Jane Harvey only to find her fighting off a technical hacking attempt. Drawn into a decade-long conspiracy, both Peter and Jane need to dig deep and rely on each other to save the Agency.

Peter Abrams is used to charming and talking his way into—and out of—every situation. But he’s not so savvy when it comes to the technical side of things. Jane Harvey has never met a system she couldn’t crack, but even she is kept on her toes when a hacker attempts to steal archived files from the Agency.

They’re both drawn into the conspiracy, a deep, dark secret the Agency has been hiding for decades. Unsure who to trust, when even their own people might be involved, Peter and Jane try to treat this like any other case, but such delicate files are in play it’s impossible to know where to turn.

Drawn together, Peter and Jane have to trust themselves and each other or the explosive revelations might destroy the very Agency they both work for and love.